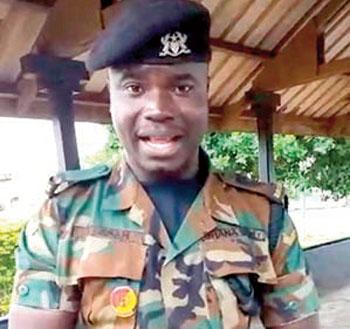 The danger posed by the existence of a virus in the Armed Forces of a nation is as overwhelming as it is scathing. It is damaging to the foundation of a nation and can send its democracy escaping through the window when it is not checked immediately.

We must be thankful to Providence that Cpl Isaac Wassa Lincoln who represents this contagion in our world-acclaimed Armed Forces has been identified through his own making. As if possessed by a spell, he exposed himself in full uniform of the Ghana Armed Forces (GAF), a state property, as a man who cannot abide by the standards of the military.

We are finished as a nation when we allow soldiers to start expressing their personal opinions on issues regardless of the subject. Such traits exist only perhaps among ragtag militias where discipline is anathema.

The soldier has set a smelly record in the GAF and is already being paid in his own coin we can bet.

When a soldier attacks the integrity of a Parliament as the Cpl under review did, he is asking for a coup d’état. When such military adventurism occurs one of the first casualties is the Legislature which is immediately dissolved and, of course, democracy replaced by junta rule.

He has infected the image of the GAF with an impression which does not inure to the benefits of its international standing.

Over the years, our Armed Forces have carved a highly revered image for their component services. Therefore, the reckless behaviour and undisciplined conduct of the Cpl to threaten this image should be condemned.

It is for good reason that soldiers, as it were, are restricted in their everyday lives under a regimented system the world over.

The foregone allows the body of men and women to function in unison and soldier-manner as we observe on the drill square and the battlefield. These are important factors which enable soldiers to defend the territorial integrity of a country. Any breach to these standards as the Recce Corporal did should be dealt with swiftly and thankfully there is a relevant section of the military law to deal with it.

Such a virus, as the soldier is, must be expunged from the defence system lest it spreads to other organs or components of the pride of the nation.

For those who have not found anything wrong with the conduct of this soldier let them cast their minds to the events of June 4 1979 when the democracy of the country was stalled followed by disappearances, murders and the rule of a junta.

The interests of democracies are best served when such Armed Forces are maintained according to age-old discipline for which they are noted.

Those who have signed up and are serving the nation as soldiers know what it means to bear GH and regimental numbers. The moment they can no longer abide by the standards the appropriate action for them to do is drop the uniform which belongs to the state.

A Leader Rules His House!