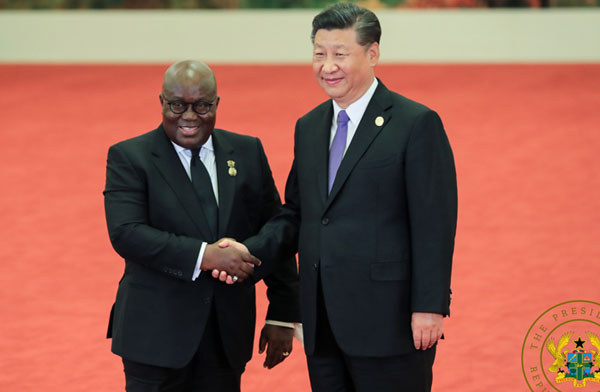 President Akufo-Addo says Ghana is aiming to replicate China’s development model which has seen the Asian giant create progress and prosperity for the masses of the Chinese people over the last three decades.

According to President Akufo-Addo, “We are witnessing, today, how China’s aggressive development of the market economy on the wheels of industrialization in this new era of “socialism with Chinese Characteristics,” has lifted some half a billion people out of poverty, creating the world’s largest middle class in the process.”

He disclosed this at the 3rd Summit of the Forum on China Africa Co-operation (FOCAC) yesterday in Beijing, China.

Ghana, the President said, is “inspired by this model, and are trying to replicate same, through inter alia, our industrialisation policy of “One District, One Factory, and an increase in agricultural productivity through the programme for ‘Planting for Food and Jobs.”

Addressing presidents and heads of state at the FOCAC Summit, the Ghana leader congratulated the Chinese President Xi Jinping on holding the summit.

President Akufo-Addo noted that both sides of the aisle, i.e. China and Africa, recognize that a win-win situation for their respective peoples is the desired outcome.

With China being Ghana’s largest trading partner, and indeed for the majority of countries in Africa, the President stated that the continent is grateful for the support, i.e. financial and technical, given to African countries over the years, and implementation of the commitments made by China at recent FOCAC Summits which have benefitted the peoples of the African continent considerably.

“We believe that the ‘Belt and Road Initiative,’ proposed by President Xi Jinping, will further intensify Chinese commitment to Africa’s development. Last night’s message from President Xi, in his opening statement at this summit, involving the allocation of a comprehensive package of support for Africa’s development, including a $60 billion fund, is a powerful reinforcement of that commitment,” he added.

President Akufo-Addo said, “I have urged others not to ignore Africa, and I am glad that China is, most certainly, not ignoring our continent.”

With the World Bank projecting that six of the world’s 10 fastest growing economies this year, including Ghana, would come from Africa, he indicated that the continent is rich in natural resources and in possession of nearly 30 percent of the earth’s remaining mineral resources.

To this end, the President reiterated the resolve of his administration to “building a value-added, industrialised economy with a modernised agriculture, trading in the global marketplace on the basis of things it makes and chart its own self-reliant, independent path within the world economic order.

“We believe that effective cooperation with China will help us attain this goal. Indeed, we want our relations with China to be characterised by an increase in trade and investment cooperation, and not by the export and import of raw materials,” he said.

This, according to him, is the way to develop healthy relations between Ghana and China, and thereby put Ghana at the high end of the value chain, and create jobs for the teeming Ghanaians, particularly the youth.

President Akufo-Addo told his colleague presidents that “we are determined that this new era of Ghana-China, and Africa-China relations will reaffirm the principles of solidarity, mutual trust and respect which have anchored those relations, and which will assist us deliver progress and prosperity for our peoples.”

Too Late To Patch It Up