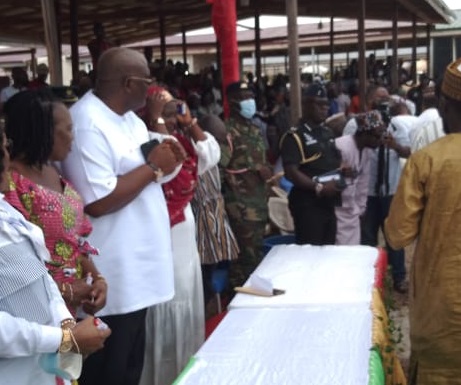 The Greater Accra Regional Minister, Mr. Henry Quartey, has visited onion sellers at Gomoa Dominase, a year after their relocation from the previous Agbogbloshie location in Accra.

During the visit to see how they are faring, he reiterated government’s commitment to enhancing their working conditions.

Their relocation to the location and Agyen Kotoku in the Ga West Municipality in Accra was informed by the decision of the authorities to decongest the Agbogbloshie part of the nation’s capital.

Gomoa Dominase onion market has about 2,000 occupants and is located off the Kasoa-Takoradi Highway in the Central Region.

Mr. Henry Quartey used the opportunity to assess the needs of the traders.

He said, “We are here to assess your conditions of living after been here for a year. We can say that you are far better off here having stayed at Agbobloshie for over 20 years. You can attest to this yourself though there was earlier resistance by a lot of you. I believe that in the next five years, you are all going to be far more excited about your stay here than ever.”

He stated that though their concerns about the lack of potable water and electricity were being addressed, government would in the interim provide them with a bore hole and some electricity poles, light bulbs and also work towards providing speed ramps to ensure their safety.

He urged them to root out any suspicious characters found among them, in response to the demands of the national security’s clarion call for people “to see something and say something” in the face of the terrorist activities in the West African sub-region.

Mrs. Justina Marigold Assan, the Central Regional Minister, on her part thanked all stakeholders, particularly the chiefs, for their support during the relocation exercise. She appealed to individuals and institutions to partner the assembly to make the market an ultra-modern one with state-of-the-art facilities.

The Zongo chief for the area, Abdul-Rahman, on behalf of the market association who were full of praises for the regional minister, expressed their appreciation to government for its commitment and support towards providing them with decent working condition.

I Am For The Youth – Kamal Gumah

Antimicrobial Resistance: Where Did We Go Wrong In Our Efforts To Help Humanity?