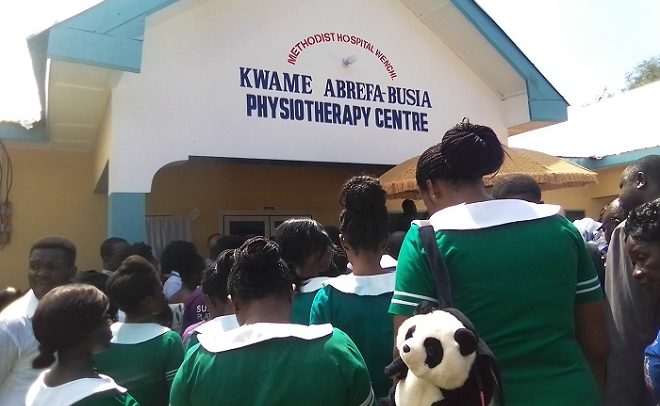 Some nurses at the opening of the physio centre

A philanthropist, Kwame Abrefa-Busia, has built a modern physiotherapy centre for the Wenchi Methodist Hospital.

Mr. Abrefa-Busia, who is a Ghanaian born German, said he was motivated by the teachings of Prof. Kofi Abrefa Busia, Ghana’s former Prime Minister that say citizens should offer themselves for voluntary service and show brotherliness.

“Government alone cannot do it all. Citizens in Ghana can do same but not always depend on government for everything,” he said when the building was being commissioned.

He said he was confident the facility would improve quality of service for patients in and around Wenchi.

The facility, which is called Kwame Abrefa-Busia Physiotherapy Centre worth 200,000 Euros, is equipped with modern physiotherapy equipment like treadmill, exercise bicycles, parallel bar, tilt bed, wall pulley, among others, for different kinds of exercise…

Most Reverend Boafo said “the role of empowering women and children through education and health is the number one priority of the Methodist Church Ghana.”

He commended Mr. Abrefa-Busia highly for the kind gesture saying “you shall be remembered forever.”

The Wenchi queen mother, on her part, recalled the role played by traditional authorities in the establishment of the hospital and said they would continue to make sure the hospital functioned properly.

She urged Wenchi citizens — both home and abroad — to emulate the good gesture of Kwame Brefa–Busia.