‘We’re Sorry For Not Giving You An MP’ – Krachiwura 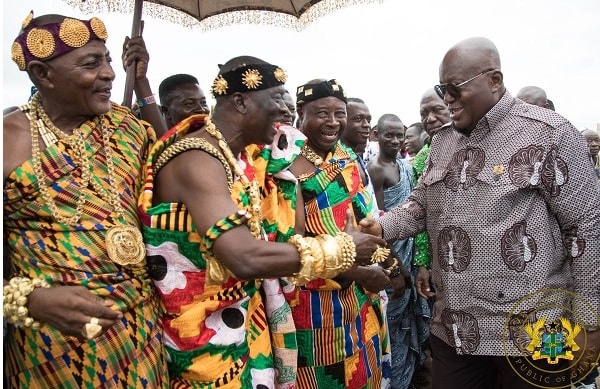 The Overlord of the Krachi Enclave in the Oti Region (Krachi Wura), Nana Mprah Besemuna III has expressed regret that the Oti region could not produce a diversified representation in Parliament.

According to him, the 2020 general election was a good opportunity for the governing New Patriotic Party (NPP) to have MPs from the area, however, not a single seat could be delivered.

In what seem to be an apology, the Presidentof the Oti Regional House of Chiefs intimated, “It is sad that Oti did not contribute any seat to your victory despite all that your government did for the region… We can only apologise and urge you to put this behind you and focus on your developmental agenda for Oti so the people can boast of your legacy in the area.”

He expressed the sentiment when President Akufo-Addo and some Ministers of State when he interacted with traditional leaders at Dambai, as part of a day’s tour of the region, last Thursday.

The sentiments of the eminent Chief seem to reiterate the outcry of the residents of the region after the NPP lost its only seat (Krachi East) after the December 2020 elections.

Political analysts had projected that the NPP would secure at least three parliamentary seats, particularly in Krachi East, Krachi West and Krachi Nchumuru considering the creation of Oti region and the plethora of development projects that had been committed to the area.

The party believed Nkwanta North’s seat could also be won.

Although the NPP’s votes increased considerably as compared to previous elections; they were not enough to secure a single seat out of the eight seats of the region.

That notwithstanding, the Krachiwura urged the President not to be dismayed. Instead, he should be resolute and focuss on delivering on his promises to the region.

“That is the beauty of the democracy. Being an astute politician, I believe you will appreciate the dynamics of the issues,” he added.

He commended the President for his resolve that led to the creation of the Oti region; stressing that “we do not  regret fighting  for our won region.”

According to him, but for the new region, the many development projects across the region will not have happened.

In his response, President Akufo-Addo said despite the NPP’s inability to secure a seat in the area, he is committed to leaving a lasting legacy for the Oti Region, particularly having a  bridge over River Oti.

“I have made the promise and I am going to see to it  that it is done.I will make sure it (the Oti Bridge) is my legacy for this region. We will do it; the bridge. As well as the Technical University. We will ensure they are done,” President Akufo-Addo said.