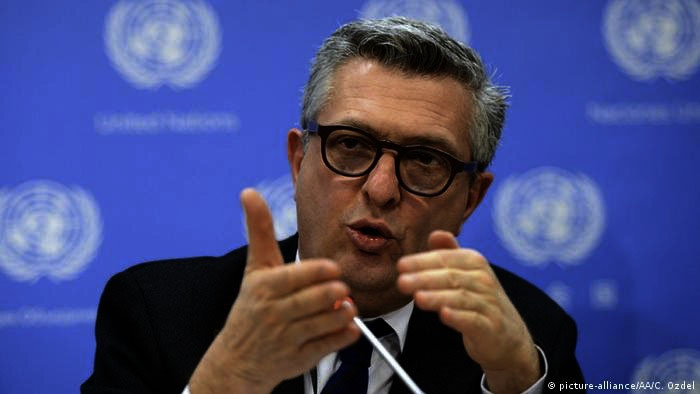 A Yemeni humanitarian organization that has provided a lifeline to tens of thousands of people displaced by the country’s conflict has been adjudged winner of the 2021 UNHCR Nansen Refugee Award.

The Jeel Albena Association for Humanitarian Development, founded in 2017, won the prestigious award for its unwavering support for displaced Yemenis, even as shifting frontlines brought gun battles and explosions to its doorstep.

Its founder Ameen Jubran, 37, has himself been displaced by fighting and nearly killed.

The award to Jeel Albena draws attention to people displaced by conflict in Yemen, a country facing one of the world’s worst humanitarian crises. Four million people have fled their homes and are in dire need of protection and assistance. Yet the conflict and its human suffering are often ignored.

“The areas where we work are considered to be among the most impoverished, and also the most dangerous,” Jubran said. “We felt the danger every day but, despite that, we had displaced people and others who needed our help. We couldn’t just leave them behind without providing them with assistance.”

Jeel Albena employs more than 160 people and is supported by an additional 230 volunteers, many of whom are displaced themselves. Based in the Red Sea port city of Hudaydah, it has provided jobs and around 18,000 emergency shelters for people who are internally displaced and living in informal sites in the provinces of Hudaydah and Hajjah.

The organization also supports displaced women to become self-sufficient and renovates schools, benefiting both the local community and displaced population.

“The extraordinary work carried out by you and your team, and your perseverance in helping Yemenis from all backgrounds, is an example of humanity, compassion and dedication,” said UN High Commissioner for Refugees Filippo Grandi, speaking of Jubran.

Jubran will receive the award on behalf of his team at a virtual ceremony on October 4, 2021.

The award will include a commemorative medal and a monetary prize of US$ 150,000. The five regional winners will also be recognized at the ceremony.

The award also highlights the extraordinary work done by many local NGOs on the ground in Yemen.

This year, there were 200 nominations for the Nansen Refugee Award. There are also five regional winners:
● Jorge Santiago Ávila Corrales, 33, is a Honduran social worker and director of Jóvenes Contra la Violencia. He is honoured as the winner from the Americas for his courage and dedication in challenging gang violence that blights the lives of many young Hondurans.

● Doctor Saleema Rehman, 29, lives and practices medicine in Pakistan. She is honoured as the winner from Asia for her courage and dedication as a medical professional during the COVID-19 pandemic and as a changemaker in the promotion of girls’ education.

● Nikola Kovačević, 32, is an independent human rights lawyer from Serbia. He is honoured as the winner from Europe for advocating for the rights of refugees and asylum seekers in the Balkans region.

Established in 1954, the award celebrates the legacy of Fridtjof Nansen, a Norwegian scientist, polar explorer, diplomat and first High Commissioner for Refugees for the League of Nations.

The UNHCR Nansen Refugee Award honours individuals, groups or organizations for going above and beyond the call of duty to protect refugees, other displaced and stateless people.

There have been over 60 global winners from different countries since the award was first established in 1954.