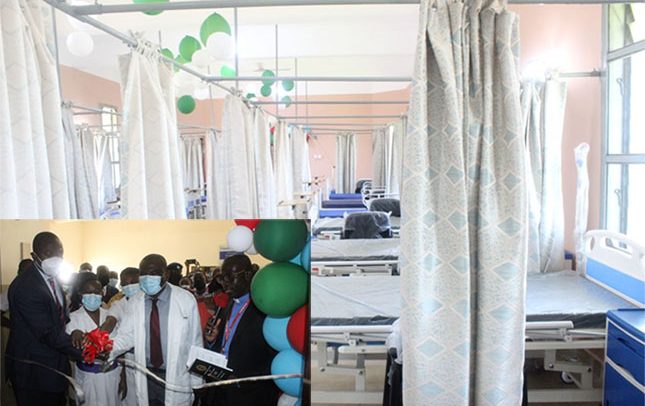 An inside view of the Ward B. INSET: Dr. Opoku Ware Ampomah and Dr. Frederick Kwarteng cutting the tape to open the Ward B

The Korle Bu Teaching Hospital (KBTH) has commissioned the refurbished Orthopedics Ward B of the Trauma & Orthopedics Department.

The 20-bed capacity ward that houses the accident and trauma related specialist care was revamped at a cost of GHc700,000 from the internally generated funds of the Department and supported by the Chief Executive Officer (CEO) of KBTH, Dr. Opoku Ware Ampomah.

A decent area including a washroom for patients and health officers, a kitchenet for nurses and resting area for nurses were also created.

Head, Trauma & Orthopedics Department Dr Frederick Kwarteng, speaking at the commissioning said the Ward B is part of the 200-bed capacity Department. 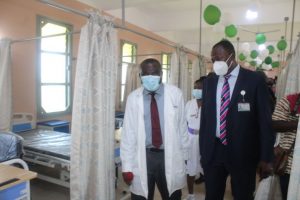 He said the Ward B, prior to the renovation was in a deplorable state which made it unfit for practicing specialist care.

“The ward had been in a deplorable state, it had deteriorated so much that it was not fit for practicing specialist care and for nursing human beings. Prior to the renovation, all accident victims who were admitted to the ward refused admission and those who had to stay refused to use the washroom because of its poor state,” he stated.

Dr. Kwarteng therefore indicated that the department supported by Dr. Ampomah decided to embark on the journey to revamp the ward.

“The renovation that cost almost GHC700,000 was from profits generated from orthopedic implants grossly assisted by the chief executive officer Dr. Opoku Ware Ampomah and executed by a number of external partners.

It is the only ward in the orthopedics department that will have mobile monitors,” he said.

Dr. Ampomah praised the solid leadership of the Department for the exemplary work done.

He said such an initiative is proof that Korle Bu has people who are capable of working together to improve the facility.

Dr. Ampomah expressed excitement at the creation of a conducive area for the staff of the Department indicating that when the staff is properly taken care of, they can also give off their best.

Truck Runs Over Cop At Buipe