You Can’t Destroy My Wife – Rawlings 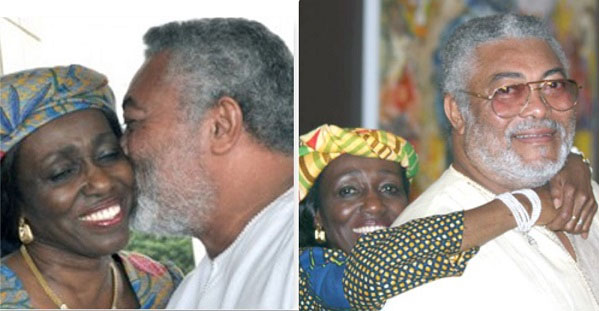 The former First Lady, around 2011 towards 2012, left the NDC to form the National Democratic Party (NDP) after the party humiliated her in Sunyani during the FONKAR GAMES.

She had attempted to replace the then sitting President John Evans Atta Mills as the NDC flagbearer during the NDC presidential primary so that she could lead the party in the 2012 general election and make Prof. Mills a one-term president.

In its attempt to stop the former First Lady, the NDC government used state machinery to discredit all her efforts and the party members have since not relented in launching blistering attacks on her anytime she decides to contribute to national issues.

The attempt to discredit her was confirmed in the book titled: ‘Working with Rawlings’ authored by NDC kingpin Professor Kwamena Ahwoi, who has made damning allegations against the former President and his wife.

Former President Rawlings, in his latest response to Prof. Kwamena Ahwoi’s book, said the NDC owes its identity to his wife and that it can never distort that piece of history.

“The role, hard work, strategy and organizational talent that Nana Konadu applied to build and propel the NDC to countless victories can never be eroded,” Mr. Rawlings stated in a statement signed by Kobina Andoh Amoakwa of the Communications Directorate of the Office of the former President.

Mr. Rawlings added that “the various attempts to not just discount the central role she played but to also deride her is symptomatic of the myopic selfishness of characters within the NDC, who cannot appreciate the fact that in so doing to pioneers of the party like herself and others, you have no history to speak of.”

He indicated that for Prof. Ahwoi “to peddle falsehoods in the name of hearsay as a justification for the blatant lies in the book is unbecoming of an academician; albeit with the sole intention of creating the impression that Nana Konadu had a role to play in the so-called Rawlings versus Mills tale.”

According to him, Nana Konadu played an integral role in the development of both the PNDC and the NDC, and the attempts by the author to denigrate her and nullify the key strategic and organizational role she played are yet “another disappointment of the book.”

Flt. Lt. Rawlings who founded the NDC said when the ‘Swedru Declaration’ was made prior to the 2000 general election, Nana Konadu Agyemang-Rawlings had been out of Ghana for several months, working on a women’s health project for the World Health Organization (WHO).

“A fact the author could quite easily have verified, were he or any of his proofreaders inclined to do so. She was informed about the declaration while she was abroad. Surely, logic would indicate that had she had any intention to contest that election, she would have been in the country campaigning, or at the very least, have set in motion her campaign machinery with which to achieve her presidential objectives,” he pointed out.

He said at no point did his wife indicate to him or members of the NDC that she had any intention or inclination to be the flagbearer of the party, adding “on her return to the country, she rapidly rolled out her campaign strategy and machinery in support of Professor Mills.”

Mr. Rawlings asserted that Prof. Ahwoi could have easily and publicly verified “this fact” if his intention was to chronicle historical facts of the NDC.

He indicated that the author, in writing on the NDC extraordinary congress of April 2000, again alleged that Nana Konadu Agyemang-Rawlings was unhappy with the proliferation of “Mills for President” T-shirts at the grounds and confronted several people who wore the T-shirts, including himself (Kwamena Ahwoi) and Kofi Totobi-Quakyi.

The NDC founder said this defies logic for “an academician-turned author to include this falsehood in his work when President and Mrs. Rawlings had publicly thrown their weight behind Vice-President Mills for the Presidency and indeed after the Congress, they campaigned extensively and comprehensively for the candidate.”