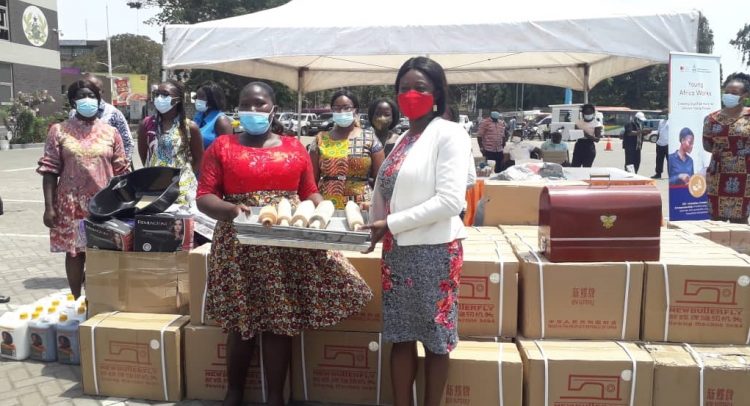 About 70 beneficiaries of the Apprenticeship to Entrepreneurship (A2E) module of the Mastercard Foundation and National Board for Small Scale Industries (NBSSI), Young Africa Works initiative, have received start-up kits to pursue their entrepreneurial goals of establishing successful businesses.

The support was provided to beneficiaries from the Greater Accra Region who had undergone an intensive apprenticeship programme to garner the requisite skills for starting their businesses.

Beneficiaries received training in hairdressing, baking, fashion design, electrical and welding among others.

It is expected that about 39,000 jobs will be created for Ghanaian youth by 2022 when the Young Africa Works initiative finally ends.

Speaking at a graduation ceremony in Accra, the Executive Director of NBSSI, Kosi Yankey-Ayeh, said youth entrepreneurs who mostly were owners of Micro Small Medium Enterprises (MSME) were the backbone of the Ghanaian economy since “you are the ones who create the jobs.”

She urged beneficiaries to take full advantage of the opportunity provided to learn well and also make use of support provided so as to improve their living condition and warrant more support from NBSSI.

She noted that not everyone was capable of pursing higher education to secure a white-collar job hence, the need for technical and vocational skills through apprenticeship.

“Now you even find lawyers or doctors who try their hands on sewing or baking,” she said.

She thanked the President for facilitating the partnership between NBSSI and Mastercard Foundation, and also increasing the budget of the board from GH₵19,000 to GH₵1 billion.

“The Government of Ghana through President Nana Addo Dankwa Akufo-Addo is committed to its agenda of providing Ghana’s youth with decent, dignified and sustainable jobs. Since 2017 the NBSSI has created over 18,600 jobs, 61 per cent of these figures are females,” she said.

Speaking on behalf of the Accra Mayor, Mohammed Adjei Sowah, the Chief Resilience and Sustainability Advisor of the Accra Metropolitan Assembly (AMA), Desmond Appiah, said building the local capacity of businesses through technical and vocational training was important to ensure that the country did not lose money in importing goods that could be produced locally.

To attain this objective, entrepreneurship development, she noted, had globally remained a key alternative to solving the problem of youth unemployment.

She therefore urged the youth to develop an entrepreneurial mindset that could be well nurtured through apprenticeship.

Young Africa Works initiative, a project under NBSSI’s Youth Entrepreneurship and Employment Programme (YEEP) also has other modules such as the Innovation, Creativity and Entrepreneurship (ICE) and the MSME Business Acceleration (MBA)