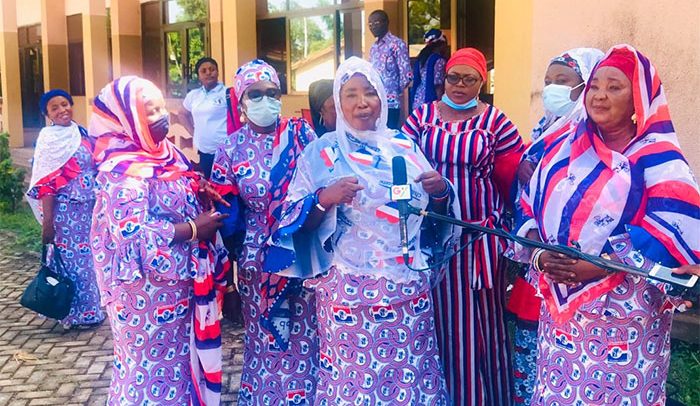 The National president of the Zongo Women for NPP, Hajia Barkisu Seidu Bawie, has inaugurated the Northern Regional branch of the group in Tamale to empower them to work tirelessly to retain the NPP in power come December 7.

The Zongo Women for NPP is a volunteer group formed prior to the 2012 elections under the auspices of Second Lady, Samira Bawumia.

The National president of the Zongo Women speaking at the inauguration ceremony in Tamale said the aim of the group was to bring out every Zongo community women to vote massively for President Akufo-Addo and parliamentary candidates of the NPP in the December 7 general elections.

She encouraged group members to ensure that they intensify their door to door campaign at market squares , rally grounds, among other places.

Hajia Barkisu appealed to the party big wings to help Samira Bawumia to the empower the group to enhance their campaign throughout the country for the NPP.

“ I appeal to stakeholders especially the Regional ministers , Mayors, MMDCEs, business men and women, regional executives to rally behind us with the necessary support to ensure the smooth running of the affairs of our foundation for the resounding success of our party.”

The Northern Regional President for the Zongo Women for NPP, Rahinatu Iddrisu, said they were poised for campaign in the region to ensure that the party wins overwhelmingly in the region.

She called on party faithfuls in the region to support the group and assured the party that the Zongo Women for NPP will ensure that Zongo’s vote massively for the party come December 7.