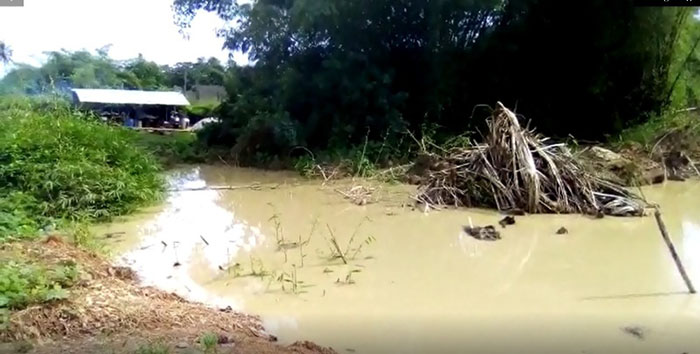 Parts of Nkroful, the hometown of Ghana’s first President, Osagyefo Dr. Kwame Nkroful in the Ellembelle District, were submerged following a downpour which lasted for an hour.

The floods which destroyed properties and personal belongings worth millions of cedis also displaced hundreds of people.

Speaking to the GNA, some of the affected victims attributed the flood to incessant illegal mining activities aka galamsey behind the Nkroful Agricultural Senior High School and parts of the Nkroful town.

It would be recalled that in April, the youth in Nkroful warned that “if the government did not halt galamsey activities in the area and reclaim the devastated land, the area would be engulfed by flood when the rains set in.”

According to the victims, the galamsey pits remain uncovered, a situation that contaminates their main source of drinking water – the River Subre.

The residents said they now live in “fear and panic” as the coming rains could wreak more havoc on the affected communities.

According to the victims, several complaints to the District Assembly had fallen on deaf ears.

Speaking to the GNA, the District Chief Executive (DCE) for Ellembelle, Kwasi Bonzoh, said “it is not entirely true that it is galamsey activities that have led to the flood.”

He ascribed the flood which he described as “a perennial problem” to a bridge constructed by Adamus Resources Ltd., a gold prospecting mining company linking the old and new sites of the company.

Mr. Bonzoh lamented that “the bridge is narrow and, as a result, the water cannot flow through” leading to the flood.

The DCE said Adamus should be held responsible for the shoddy works that had caused the floods.