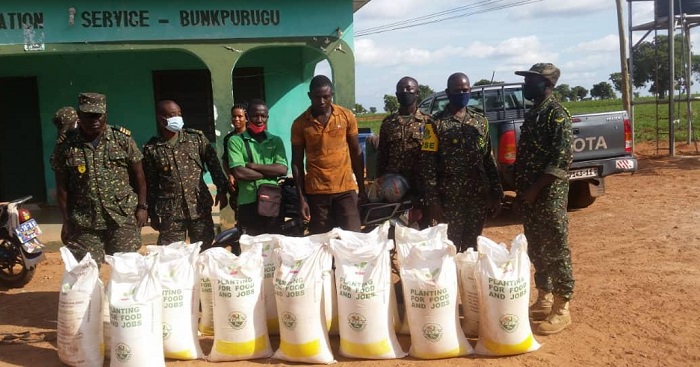 GIS officers with the Togolese and PFJ fertilizers at Bunkpurugu

Personnel of the Ghana Immigration Service(GIS) stationed at the Bunkpurugu border have arrested 10 Togolese nationals with 16 bags of planting for food and jobs fertilizers.

Two of the Togolese were intercepted on their way out of Ghana on motorbikes and were carrying eight bags of fertilizer each meant for planting for food and jobs.

The Togolese were arrested for illegal entry and out through some unapproved routes on motorbikes.

The Ghana Immigration Service in the North East Region deployed personnel in six(6) different unapproved routes in the region to help curb the smuggling of fertilizers in the area.

The District Immigration Officer Edwin Adjetey Doku, told journalists that the Togolese have been handed over to the Togo Immigration.

According to him, the seized motorbikes and fertilizers, however, were confiscated and reported to the District Chief Executive for the necessary action to be taken.