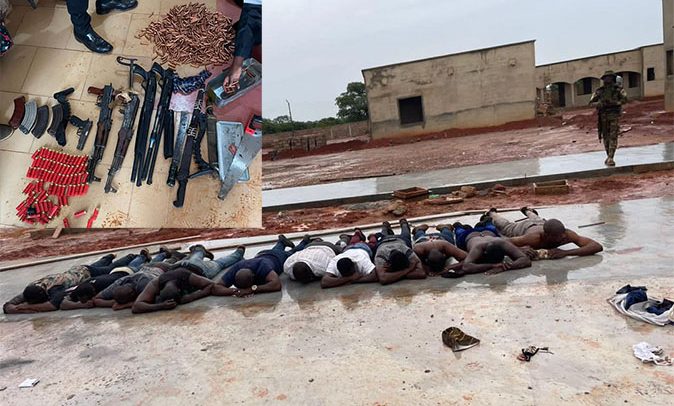 The 12 suspected land guards who were arrested at Gambaga in the East Mamprusi Municipality of the North East Region have been arraigned before the Tamale Circuit Court presided by Alexander Oworae.

The suspects were charged with possession of arms and ammunition without authority and three charges relating to engaging in the prohibition of land guard activities under the Vigilantism Act.

The court, however, declined jurisdiction on the two counts and granted them bail on the three counts.

The suspects will be put before a different court on the other two charges of possession of arms and ammunition without authority.

The suspects are expected to reappear in court on October 19, 2022.

The twelve 12 suspects were arrested at Gambaga in the East Mamprusi municipality of the North East region when they clashed with residents leading to the shooting of two persons in the process.

The police retrieved about 1,000 pieces of live ammunition, 2 pump action guns, 2 Ak47 rifles, 1 foreign pistol, and machetes among others.

A private developer, Tanko Fatau is said to have encroached on land belonging to the East mamprusi assembly which resulted in the demolition of some parts of the building last year.

The developer was, therefore, cautioned about the encroachment but he failed to comply last year and brought the suspected land guards to protect workers whiles the building was ongoing which resulted in the latest clash with the residents.