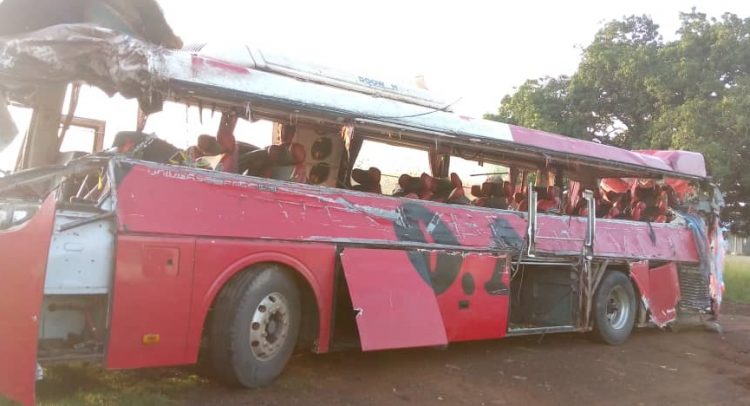 THIRTEEN persons made up of four females and nine males, have died in a gory crash on the Accra-Kumasi highway.

The Sunday evening crash occurred when an Accra-bound articulator truck, whilst overtaking another truck, veered into the oncoming lane and in the process, collided head-on with a passenger bus.

The truck, loaded with fresh pepper, upon reaching Ohene Nkwanta, near Konongo, wrongly overtook a truck ahead of it, and it eventually crashed into the oncoming bus.

Aside the high number of deaths recorded, additional 13 people, said to be in the Hyundai bus, who sustained life-threatening injuries, have been hospitalized.

Francis Boadu, the Administrator of the Konongo Government Hospital, has said a four-year-old girl, also sustained severe facial injuries during the gory accident.

He said, “I learnt that the four-year-old girl lost her grandmother during the crash; she was brought here and we referred her to KATH in Kumasi for further treatment.”

The Konongo Divisional Police MTTD Commander, DSP Stephen Paa Yeboah, confirming the accident, blamed the truck driver for being the cause of the bloody crash.

“The accident occurred around 10:30pm on Sunday and it involved an Accra-bound articulator truck, loaded with fresh pepper and a Kumasi-bound Hyundai bus.

“The truck was speeding and it was about to hit the rear of another truck ahead of it; so the driver in an attempt to avert the crash, veered into the other lane. Unfortunately, the speeding truck crashed head-on with the oncoming Hyundai bus, resulting in 13 deaths on the spot and 13 injuries,” the police chief said.

DSP Yeboah said the dead bodies, which are yet to be identified, have been deposited in a morgue, adding that the injured people are receiving treatment in hospital.

He also disclosed that the drivers have been detained and are assisting in the investigation being conducted by the police into the bloody accident.

Ex-TOR Boss Settles With US Authorities