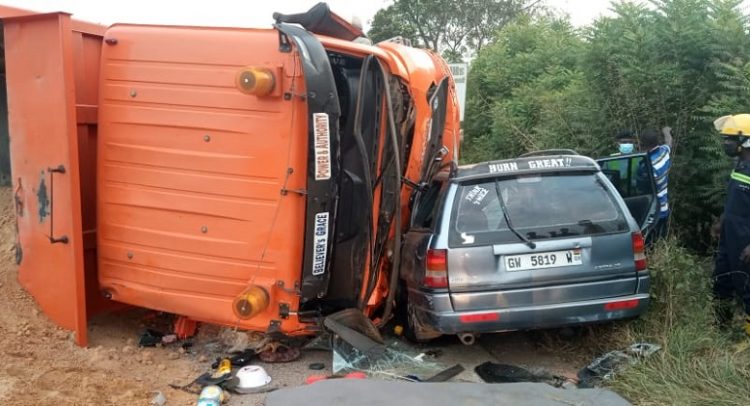 Two persons died on the spot on Wednesday evening in a gory accident on the Accra-Tema Motorway.

The accident involved a tipper truck loaded with sand which collided with an Opel Astra saloon car.

Confirming the incident, the District Fire Commander for Tema-Ashaiman Motorway Station of the Ghana National Fire Service (GNFS), Divisional Officer III, Richmond Vanderpuye, explained that his outfit received a distress call at 5:31pm about an accident on the expressway.

The Fire Commander said the first accident was between the Sino Tipper Truck and the Honda CRV which were both heading towards Accra; the tipper truck loaded with sand veered off its lane, and collided with the Opel Astra which was heading towards Tema from Accra, leaving two persons dead.

Continuing, he said that two persons who suffered various degrees of casualties were sent to the Tema General Hospital by the police before fire personnel arrived.

He explained that, the two trapped lifeless persons in the Opel Astra were however extricated by the fire men and handed over to the Tema Regional Motor Transport and Traffic Department (MTTD) of the Ghana Police Service.

He said the Honda CRV suffered some partial damage on the rear side; the Sino Tipper Truck on the other hand had its head compartment and bucket damaged.

The cause of the accident, he said, was not immediately known, but he admonished the public to drive with extra care on the motorway and immediately call the Service when there are incidents.