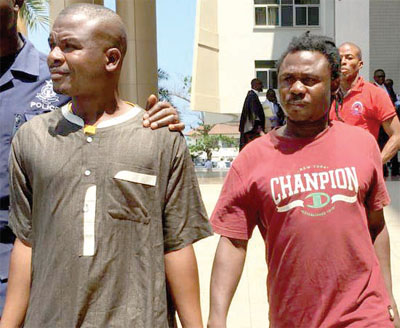 STATE PROSECUTORS have dragged before an Accra High Court two more persons believed to be members of the gang that kidnapped two Canadians ladies in Kumasi early this month.

The prosecution, led by Hilda Craig and Winifred Sarpong – both senior state attorneys – urged the court to remand the suspects – Safianu Abubakari and Abdul Rahman Suleman, aka Worfa – to enable the police to conclude their investigations into the matter.

The two new suspects are facing two counts of conspiracy to commit kidnapping. Their plea was not taken as the prosecution told the court that the police were yet to conclude their investigations.

Ms. Craig told the court that the police had initially wanted to grant police enquiry bail to the two suspects, but upon investigations, it turned out that the two knew more about the ‘operation’ than it had been thought earlier

She stated that Abdul Rahman owned the vehicle which was used in the ‘operation’ to kidnap the ladies while Safianu was found to be part of the criminal gang and a close associate of Yusif Yakubu, who is alleged to be one of the main architects of the kidnapping.

In the course of the proceedings, Abdul Rahman Suleiman told the court that his decision to take a photograph (selfie) with Yakubu was what had landed him in trouble.

According to him, Yakubu took a picture with him while they were eating and uploaded it on Facebook, a social media platform.

He said it was based on that picture that the police arrested him as being part of the gang.

Abdul Rahman, whose vehicle was used in the ‘operation’, also told the court that he had no idea they were going to use it for kidnapping, adding that he would not have given them the vehicle if he knew.

The two were taken into BNI custody to be returned to court on July 1 together with the other six suspects who have already appeared before the court and remanded.

Six persons were last Friday remanded by the court presided over by Justice George Buadi following the request of the Office of the Attorney General which said the case was still under investigations.

The prosecution, at the previous sitting, told the court that the accused persons were demanding $800,000 as ransom before they would release the ladies.

An all-Ghanaian security operation led by the National Security on June 12 rescued the two Canadian ladies who were abducted from the gates of their hostel in a Kumasi suburb a fortnight ago.

They are said to have kidnapped their victims and kept them in an uncompleted building on the outskirts of town.

The two ladies had boarded an Uber to their hostel at Nhyiaeso behind the Vienna Hotel, but were accosted by the accused persons when they arrived at their destination and alighted from the car.

“The accused persons assaulted the victims and forced them into their vehicle amid shootings. The four accused then sped off with the victims to their hideout which was in an uncompleted building at Kenyasi Krobo, a suburb of Kumasi,” the court heard.

The court also heard how in an attempt to create an impression to the families of the victims that they had been seriously tortured, the accused persons smeared blood all over the victims and on the floor of the building.

The suspects are also said to have taken pictures of blood-soaked victims and forwarded same to their families in Canada to compel them to pay the $800,000 ransom.