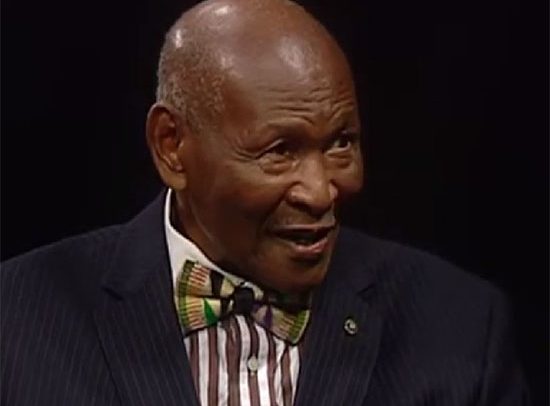 Veteran legal practitioner and a former president of the Ghana Bar Association (GBA), Sam Okudzeto, says the Private Members’ Bill filed by two opposition National Democratic Congress (NDC) MPs, seeking to remove the Chief Justice from the General Legal Council regarding law school admissions, is a ‘big joke’ and must not be entertained.

Rockson-Nelson Etse K. Dafeamekpor of South Dayi and Francis Xavier Kojo Sosu of Madina have jointly written to request the Legislative Drafting Office of Parliament to draft for subsequent submission to the Speaker, a bill to amend the Legal Professions Act, 1960 (Act 32).

They want to push for a change in the composition of the General Legal Council (GLC) that will provide for reforms for Legal Education in the country.

The proposed law intends to exclude the Chief Justice and other Justices of the Supreme Court from the GLC and redefine the functions of the GLC in order for it to provide for “reforms in legal education” such that accredited Faculties of Law with the requisite facilities would be licensed to run professional law courses, provide for discipline of lawyers and related matters to give effect to Article 37(1) of the 1992 Constitution.

In a memo to the Clerk to Parliament, the two opposition MPs had said their move was premised on “recent reports of mass failure in the law school entrance exams and related outcry from the general public.”

Mr. Okudzeto, who is currently a member of the Council of State, said on Asaase Radio in Accra yesterday that, “If they (the two MPs) are lawyers, then their understanding of the law leaves a lot of questions.”

“I have been a member of the disciplinary committee for a number of years, I am still there… if I tell you the number of complaints that keep coming there, you will be shocked.”

He advised the two NDC MPs to tread cautiously, saying “they have problems, I think they should just go and keep quiet because there can be more troubles than they realised in the fact that we are concerned. If you misbehave, we will deal with you in accordance with the rules and laws that have been laid down.”

He also said that Parliament does not have the power to give directives to the General Legal Council as far as admissions are concerned.

“Under what authority…I’ve also been a Member of Parliament before but a lot of my people in Parliament just assume that because they are in Parliament they can do anything they like,” he said.

Already, the Attorney General and Minister for Justice, Godfred Yeboah Dame has dismissed a directive by Parliament to the General Legal Council (GLC) to proceed to admit all the students who passed the entrance examination for admission into the Ghana School of Law (GSL).

The Attorney General (AG), in a response, affirmed the authority of the GLC on legal education and said that Parliament has no power to ‘direct and control’ the process of admission into the Ghana School of Law.

According to him, the mode of exercising legislative power as enshrined in Article 106 of the Constitution does not admit of parliamentary ‘resolutions’, noting that the executive arm is the one vested with the power to direct and advise the General Legal Council on major matters of national importance.

However, the MPs, who appeared dissatisfied by the AG’s response, want the issue to be resolved through amendment to the Legal Professions Act, 1960 (Act 32), arguing that given the fact that this has been the trend for some time now, “it is important to review the policy direction behind the running of Law School by the General Legal Council.”

The MPs in their written memo for the proposed amendment of the bill had said that in 2017, more than 80% of students were said to have failed, and that only 91 out of the over 500 candidates passed.

For them, the 28% pass in this year’s admissions into the Ghana School of Law represents a “systemic problem” that must be of concern to all democracy watchers, Parliament as an institution, and everyone who believes in equality and fairness before the law as a critical component to the creation of a free and fair society with ample opportunities for everyone.

“The argument of the Law School and the General Legal Council has been that they do not have adequate space to admit all the students who apply and hence the need to increase the marking scheme to fail as much as the school can, just so as to reduce the number of students who would actually make it.

“This years’ experience where about 499 students made the 50% mark but could not gain access to the Law School gives the more reasons why we must take a second look at how legal education is organised in Ghana,” they contended.

The MPs said at the height of dealing with the issue, the Legal Profession (Professional and Post-Call Law Course) Regulation, 2018 (L.I 2355) was passed to remove issues of interviews after the entrance exams, but indicated that “the said law never cured the defects of lack of space to increase intake of qualified LLB holders seeking opportunity to read the Professional Law Course.”

“L.I 2355 must therefore be repealed and replaced with an L.I. that will take into consideration new provisions in the proposed Amendment to create a competitive market for running Law School Professional Courses with the GLC as regulator who ensures quality through the Board of Legal Education.”

The law school debate has been raging since the school’s authorities released this year’s results for the entrance examination for admissions.

Former Ranking Member of the Constitutional, Legal and Parliamentary Affairs Committee of Parliament, Inusah Fuseini, waded into the debate saying that Parliament should have threaded on a different path in dealing with the law school admissions saga.

According to the former NDC MP for Tamale Central, it would have been more appropriate for Parliament to invite the General Legal Council to discuss the matter instead of directing them on what to do.

“I think that Parliament should have chosen another route. They should have invited the General Legal Council as part of their oversight responsibilities to explain to them (Parliament) the reasons why 499 students were excluded from the admission list as advertised in their earlier advertisement for prospective students who wanted to enroll at the law school,” he said on Joy FM in Accra on Monday.

He said the approach by Parliament on the issue appeared ‘confrontational,’ adding that such a move “does not help bring the issues to the fore. The issue confronting us in Ghana is not the 499 students.”

“Clearly, we need facilities to be expanded in such a way that will make the opportunity of enrolling to the Ghana School of Law available to a greater number of students,” he added.

The ex-MP also said that Parliament could also have directed “the Executive to make resources available” for the expansion of the Ghana School of Law.