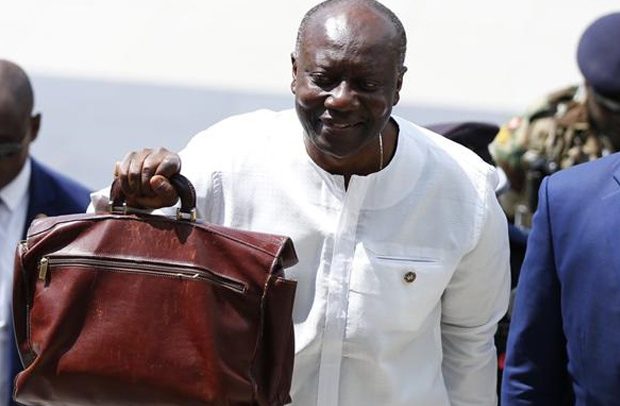 The Finance Minister, Ken Ofori-Atta, has announced that the Akufo-Addo administration will embark on massive road construction projects in 2020.

Of late, there have been widespread agitations over poor road networks across the country, notwithstanding the fact that the Mahama-led National Democratic Congress (NDC) told the public that it had embarked on unprecedented roads construction when it was in government.

Members of the NDC captured beautiful roads and other projects in their propaganda booklet — Green Book — but almost three years down the lane, those ‘massive’ and ‘unprecedented’ projects are nowhere to be found.

Mr. Ofori-Atta made ‘The Year of Roads’ announcement in Parliament in Accra yesterday when he presented the 2020 Budget Statement and Economic Policy of the Akufo-Addo government.

“Today, the cry everywhere in Ghana is about the poor state of our roads. It is an unprecedented cry and it makes you wonder where all the roads in the NDC’s Green Book are,” the Finance Minister said.

“Mr. Speaker, this is why we are going to focus more on fixing our roads across the country in 2020 and beyond. To get the road sector moving and contractors back to work, government will pay 80 per cent of all contractors,” he disclosed.

He said, “Mr. Speaker, Ghanaians want action on our roads, not words or plans or Green Book claims about what has been done. We intend to swing into action and let our work do the talking for us.”

The minister said the government had identified critical roads across all the 16 regions and works would begin on all these critical roads very soon, adding “Cocobod has also secured funds to continue with ongoing and new cocoa roads.”

“As part of our new initiative to complement the traditional execution of road projects, we have launched the Accelerated Community Road Improvement Initiative. Just this month, the Ministry of Finance released funds to the 48 Engineers Regiment of the Ghana Armed Forces, who are busy working on some roads in communities in Greater Accra,” he said.

“The first phase of the Sinohydro arrangement is finally taking off. We have also been able to mobilize the financing for over 150 roads nationwide,” he added.

“The following macroeconomic targets are set for the medium term (2020-2023): Overall Real GDP growth to average 5.7 per cent for the period; Non-Oil Real GDP to grow at an average of 5.9 per cent for the period; Inflation to be within the target band of 8±2 per cent; Overall fiscal deficit to remain within the Fiscal Responsibility Act Threshold of not more than 5 per cent of GDP; The primary balance to be in a surplus; and Gross International Reserves to cover at least 3.5 months of imports of goods and services,” he stated.

He added that based on the overall macroeconomic objective of ‘Consolidating the Gains for Growth, Jobs, and Security,’ specific macroeconomic targets had been set for the 2020 fiscal year.

“Following our significant progress in restoring macroeconomic stability over the past 32 months, we will continue to implement policies and programmes to ensure the fulfilment of our promises to our people,” he pointed out.

Total Expenditure (including clearance of Arrears), the minister said, is projected at GH¢85.9 billion (21.6 per cent of GDP) in 2020.

The expenditure estimate for 2020 represents a growth of 21.2 per cent above the projected outturn for 2019, according to him, adding that wages and salaries, are projected at GH¢22.9 billion and constitute 26.7 per cent of the Total Expenditure.

Government would continue with the implementation of the Earmarked Funds Capping and Realignment Act to reduce budget rigidities and create fiscal space to fund growth-enhancing expenditures, he stated.

“Consequently, transfers to Statutory Funds, as well as all other earmarked funds, are estimated at GH¢15.6 billion (3.9 per cent of GDP) in 2020, representing 19.6 per cent growth over the projected outturn for 2019,” he added.