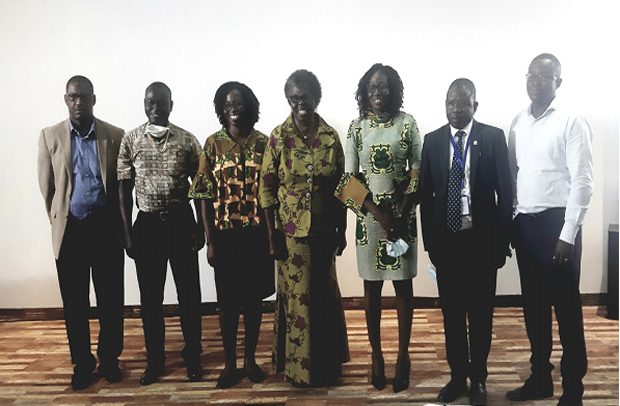 The research team from Ghana with dignitaries at the workshop

A new report on the incidence of termination of pregnancy (abortions) has revealed that about 327,600 abortions were carried out in the country in 2017.

The study also showed that despite the relatively liberal abortion laws, an estimated 71 per cent of all abortions are procured under circumstances that will be considered illegal by the government.

The study was conducted by the Guttmacher Institute in collaboration with the Kwame Nkrumah University of Science and Technology (KNUST) and the Johns Hopkins University.

Conducted at the national and zonal levels, the study interviewed women of reproductive age (15-49) in 42 households within 100 areas across the country using the Abortion Incidence Complications Methodology (AICM).

A public health professor at KNUST and lead researcher, Dr. Easmon Otupiri, said despite abortion being legal under certain circumstances for over three decades, an alarming number of women continue to obtain unsafe abortions, indicating that within the period only 58,000 legal abortions were performed in health facilities.

Senior Research Scientist at Guttmacher Institute, Dr. Sarah Keogh, presenting the recommendations of the study, urged the government and its partners to expand access to safe, legal abortion services and post-abortion care to women of reproductive age in the country.

She said this can be achieved by increasing the number of trained providers and approved facilities that offer these services in order to reduce complications and deaths from unsafe abortions.

The study also called for enhanced education on the abortion law and the expansion of contraceptive methods and high-quality counseling services.

“Ensure that women know abortion is legally allowed under some circumstances in Ghana and disseminate information on how and where to obtain safe and legal abortion services. Train lower-level healthcare workers to provide comprehensive abortion care and services,” it further suggested.

The chairperson for the dissemination workshop, Dr. Kofi Issah, called for perseverance on the part of stakeholders in attaining safe and legal abortion in the country.