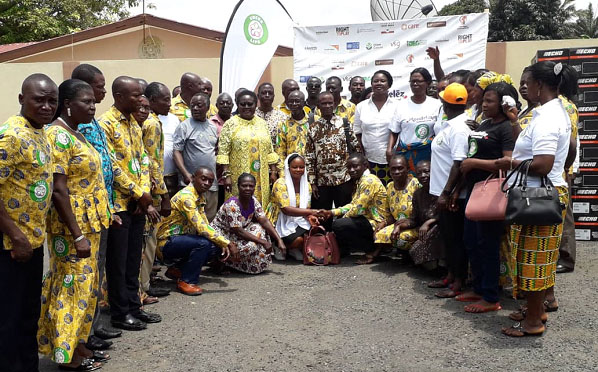 MONDELEZ INTERNATIONAL, a global manufacturing company through its cocoa life programme announces for the 2018/2019 crop year that a total number of 29,116 registered cocoa farmers in 334 cocoa communities in Ghana have received a cash premium of US$3,360,000 which is equivalent to GH¢18,000,000 to implement their development plans within their communities.

According to the country head of the Cocoa Life programme, Yaa Peprah Amekudzi, through the community action plan, cooperative societies and district cooperative unions have been established in communities where her outfit was operational in order to effectively own and drive development within their communities.

She continued that based on their productivity, these districts receive annual cash premiums that focus on aiding development with support from Mondelez International.

Such developments, she added, were evidenced through the many infrastructures, educational scholarships and social amenities that are churned out because of the cash premium.

In its bid to enhance the performance of farmers and build their capacity to increase productivity, Cocoa Life has presented a total of 100 motorised trimmers to 50 groups of cocoa farmers. These trimmers are to assist the cocoa farmers to carry out sustainable production of cocoa and gradually do away with spraying weedicides as these affect the efficiency of the soil.

Cocoa Life commits to secure 100 per cent in the volume of cocoa for all chocolate brands through its Cocoa Life Sustainability Programme by 2025.

Launched in 2012 and built on the foundation laid by Cadbury Cocoa Partnership between 2008 and 2012, the Cocoa Life programme aims to invest US$400 million in the cocoa sector by 2022 and empower 200,000 cocoa farmers to train one million others in six key cocoa growing countries in countries including Ghana, Cote d’Ivoire, Indonesia, India, Brazil and the Dominican Republic.