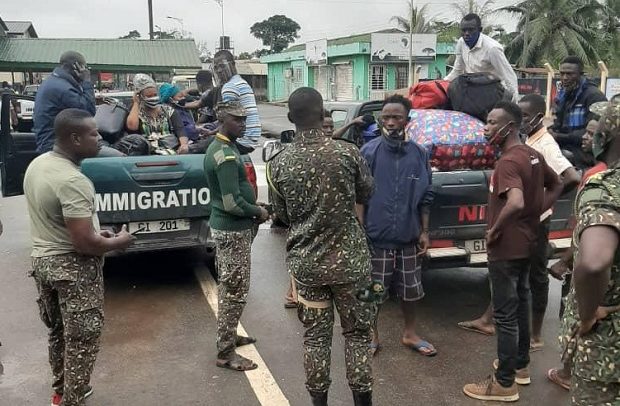 Personnel of GIS with some of the arrested persons

Officers of the Ghana Immigration Service (GIS) at the Elubo Sector Command in the Western Region have intercepted four commercial vehicles on which about 36 people from ECOWAS member states were using unapproved routes to enter Takoradi.

They were picked up during a joint operation by the personnel of the service and counterparts from the military as part of measures to strengthen the border security in the region.

All the 36, aged between 10 and 53, were taken through the Covid-19 screening protocols by the Port Health Officials at the Eubo border, before handing them over to the Ivorian authorities at Noe in Ivory Coast where they all claimed to have come from.

Assistant Inspector Moses Manford Akakpo in charge of Public Affairs at the GIS in the Western Region said the joint operation took place last Thursday between 7pm and 11pm.

“In all, 36 ECOWAS people from Nigeria, Liberia and Benin were intercepted at different sections of the Elubo-Takoradi road and escorted back to the Elubo border for proper screening and investigations,” he said.

He said investigations conducted showed that all the suspects had entered the country through unidentified illegal routes in the Jomoro municipality of the Western Region with assistance from some unpatriotic Ghanaians for a fee.

“Intelligence from those communities indicated that in order to outwit officers deployed to prevent travellers from moving across the western border, some canoe operators and commercial drivers arranged to ferry the recalcitrant travellers into the country,” he said.

“Such unacceptable behaviour is not only a threat to consolidating the collective gains made in our fight towards defeating the dreaded Covid-19 pandemic but also it is an affront to the directive of the President to keep our land borders still closed until further notice,” he pointed out.

He said they had renewed operational strategies in terms of heightened surveillance and collaborations to contain illegal and unauthorized entries.

“The Western Regional Command of the GIS is reaffirming its unwavering commitment in ensuring the continuous maintenance of optimum security within our various entry points in the region,” he stressed.

Who Wins Ghana’s Most Beautiful 2020?

Before NPP Took Over From NDC, ‘Ghana Was Drowning In The Practice Of Corruption’ - NDC Founder