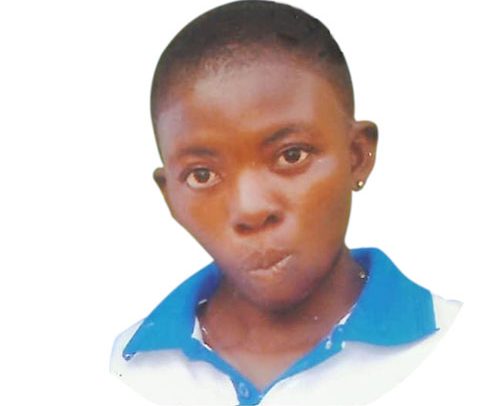 The identity of the fourth girl in the case involving the Takoradi missing girls in the Western Region is unravelling.

Ruth Abakah was 19 years of age when she went missing at Diabene, a suburb of Takoradi, about a year ago without any trace.

The kidnappers got in touch later and the family paid GH¢300 ransom money but the miscreants never released the poor girl.

She was also a Sunday school teacher at Diabene Methodist Church and was last seen on Sunday, July 29, 2018.

The family members of the girl are now claiming that the fourth set of human remains discovered at Nkroful New Site in Takoradi by the police last week could be that of their missing girl and want DNA tests for confirmation.

The fourth remains were discovered as part of police investigations into the three Takoradi kidnapping cases that have rocked the country in the past months.

Already, the whereabouts of the three girls are unknown as the two Nigerian suspects – Samuel Udoetuk Wills, 28, and John Oji, 29 – have given the security agencies a tough time in disclosing where they are keeping the girls.

The fourth human remains were located in a well in an uncompleted building where the main suspect, Samuel Udoetuk Wills, was re-arrested after escaping from police custody in December 2018.

A certain Evangelist Veronica Cobbinah, who claimed to be the grandmother of Ruth Abakah, has narrated how the young lady went missing, claiming that it happened on 29thJuly 2018 when Ruth Abakah went to Diabene Methodist Church and never returned home.

She claimed that when she got back from church her grandchild was not at home and was only told by her friends that she received a phone call and left the Sunday school service.

She claimed that the police in the area assisted the family in the payment of the ransom to the kidnappers but the girl never came back.

Evangelist Cobbinah added that various announcements to trace the girl were unsuccessful and reported the case to the Kojokrom police and the Sekondi police but to no avail.

An elder sister of the missing girl, Matilda, also corroborated the story and said the family made some payments to the suspected kidnappers who talked to her to get her sister released but to no avail.

“The one who spoke to me said they had used my sister’s name to register for MTN Mobile money so we should make the payment through that number which we did.

“At the time, I was working with MTN so I gave the number to my boss and we realised that they used my sister’s National Health Insurance card for the registration. So that was how we were convinced that she was in their custody. We have so far paid GH¢300 to them,” she recounted.

“We want the police to be quick about their DNA tests so that we can be comfortable with our lives. Right now, we are downhearted,” she added.

There is a third suspect who is said to have been picked up by the police in Nigeria in connection with the case and already, there are frantic efforts by the Criminal Investigation Department (CID) to get him extradited to face justice in Ghana.

The investigators, who are said to be personnel from the Anti-Armed Robbery Unit, according to a police source, are to follow the legal processes to expedite the extradition process.

Suspect Chika John, according to the police source, is also under investigation for another offence he had committed in his country.

The suspect, according to the CID, was arrested by a joint team of police personnel from Ghana and Nigeria.

The first victim, Priscilla Blessing Bentum, 21, a third year student of the University of Education, Winneba, was kidnapped on August 17, 2018 at Kansaworodo.

The third victim, Priscilla Mantebea Kuranchie, aged 15, a first-year student of Sekondi College, was kidnapped on December 21, 2018 at a spot near Nkroful junction.

UNER To Be Named After Busia