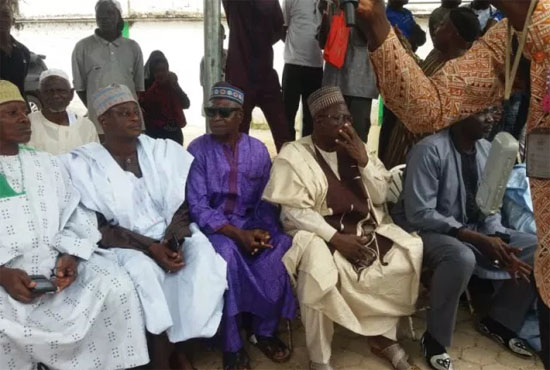 THE FINAL funeral rites of five out of seven suspected robbers, who were shot and killed by the police, have been held peacefully in Kumasi on Sunday.

The five people who were Muslims were Abdul Hannan, Bashiru Musah aka ‘Soldier’, Musah Seidu, Kamal Mohammed aka ‘Tanko’ and Razak Sulley.

The other two, who were Christians, have also been buried.

The Sunday’s solemn ceremony was held at the Central Mosque premises in Kumasi and it was graced by top politicians, Zongo chiefs and top Islamic Clerics.

Family members, friends and loved ones of the deceased persons were also in attendance.

Some of the top dignitaries that graced the event were Hon. Boniface Abubakar, who represented the Vice President, Dr. Mahamadu Bawumia,

MCE for Asokore Mampong, Alidu Seidu, and Member of Parliament for Asawase, Mohammed Mubarak Muntaka as well as other top politicians.

The Ashanti Regional Chief Imam, later on, led the Muslims present to pray fervently to Allah for the departed souls to be granted a peaceful rest.

In his address, Abubakar Sadique Boniface urged residents of Asawase to have confidence in the government committee that is investigating the killings.

He assured that the committee members would do a thorough job and at the end, the whole truth would emerge, so the Zongo youth should remain calm.

On his part, Mr. Alidu Seidu, called for peace and unity in the area, and assured that nothing but the truth will come out from the committee’s work.

Seven people, it would be recalled, were shot and killed by the police around the Manso Nkanta area more than a month ago.

Police alleged that the seven people were armed robbers who decided to engage the police in a gun battle leading to their unfortunate deaths.

But the Zongo youth at Asawase rejected the police’s assertion, arguing that the five Muslims, who they had stayed with for years, were not criminals.

The angry Zongo youth burnt car tyres and indulged in other violent acts, which compelled government to set up a committee to investigate the shooting.