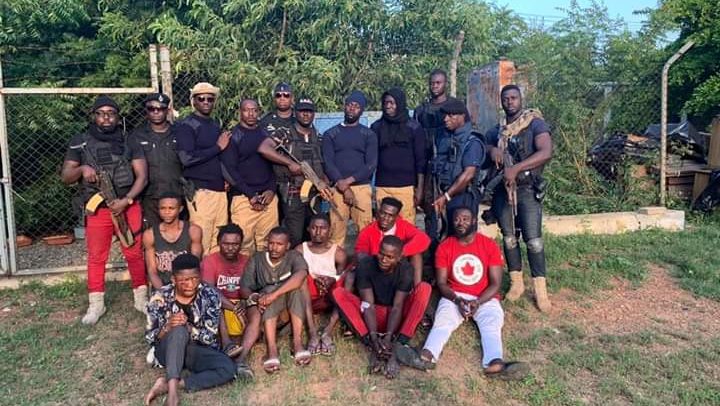 The suspects and the security personnel

FIVE GHANAIANS and three Nigerians are in police custody after their arrests in Kumasi on Wednesday, June 12, 2019 in connection with the kidnappings of the two Canadian women.

Information Minister, Kojo Oppong Nkrumah, briefed the media in Accra, as he gave updates on the rescue mission of the two ladies.

The Minister did not give further details on the identities of the eight suspects but assured that legal processes would be followed in processing the suspects for court.

That is expected to be within the 48-hour time frame as mandated by the 1992 Constitution of Ghana.

According to the Minister, it a took a National Security team 25 minutes to rescue the women from a house at Kanyasi, a suburb of Kumasi.

Mr. Oppong Nkrumah said there was no support from security experts from Canada as earlier reported.

He said Canadians were brought into the country to explore ways in which they could help the Ghanaian security operatives to rescue the ladies but it turned out National Security could handle the operation.

He also denied that the Canadians provided satellite data to aid the rescue of the women.

The Minister confirmed DGN Online’s earlier report that there were gunshots from the compound the suspects were being accommodated.

He further confirmed DGN Online‘s report that another Nigerian suspected to be the ringleader in the kidnapping of the three Takoradi girls, John Orji, has been arrested in Togo.

He said a Ghanaian was providing them accommodation for the kidnappers.

According to him, at the end of the operation, the two Nigerians who were holding the Canadians were subdued and the third Nigerian was later arrested.

Mr. Oppong Nkrumah indicated that the two Canadian women were brought to Accra and going through due medical checks at a health facility.