5 Ghanaians arrested in UAE Over Marijuana

At least five Ghanaians have been arrested at the Dubai International Airport for allegedly traveling with marijuana.

The Ghana Consul in the UAE made this known in a statement dated April 21, 2021.

According to the statement, “between January and March 2021, five (5) people have been arrested at the Dubai Airport” in connection with marijuana.

It explained that “the sad part of it is that, all the parcels containing the weed were given to them by agents in Ghana who acquired the UAE visa for them, with instructions to them to give the parcels to their counterpart agents in the UAE on arrival.”

“It is also interesting to know that the weed is normally hidden in food items,” the statement pointed out.

It added that “it may also interest you to know that currently all the five people are in police detention.”

“One of them has since been sentenced to 10 years imprisonment, probably for carrying weed he was not aware of and weed that someone else would have benefitted from”. 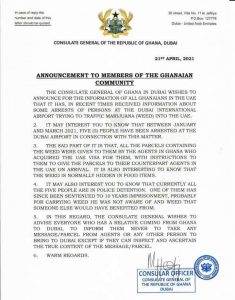