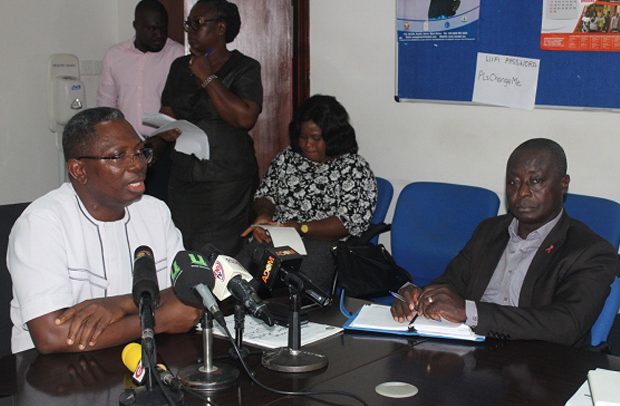 New data from the Ghana AIDS Commission (GAC) indicates that 55.3 per cent of the Ghanaian population is aware of their HIV status.

Acting Director General, GAC, Mr. Kyeremeh Atuahene, briefing journalists on the 2018 National HIV estimates and projections in Accra, said this is the first time the commission has calculated data on the country’s 90-90-90 targets.

“We are happy to announce that 55.3 per cent of Ghanaians have been diagnosed and they know their status and of this proportion, 61 per cent are on anti retroviral treatment and of the 61 per cent on treatment 66.4 per cent is virally suppressed,” he disclosed.

He said the figure represents the position of the country in its HIV fight adding, “We have got to do more to achieve the 90-90-90 targets.”

“We accept that by the end of 2020, we may not have reached the targets but we have put in place the necessary interventions and programmes to ensure that we achieve the 90-90-90 targets shortly after 2020,” he added.

Presenting the national figures, Mr. Atuahene said close to 20,000 people living in Ghana got infected with HIV in 2018.

Children below one year to 14 also recorded new infections of 3,317, representing 17 per cent of the total figure.

However, the data shows high incidence of new HIV infection among female youth (4,382) as compared to 1,175 for new infections among male youth.

Mr. Atuahene said 14,181 HIV related deaths were recorded in the year under review.

Again, HIV deaths among adults were the highest with 11,412, with deaths related to HIV among children being 2,769.