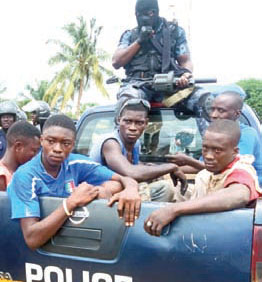 The suspects being taken to the police station

Seventy-six persons, who blocked a section of the Sunyani-Techiman highway to protest against the neglect of dual carriageway road at New Dormaa in Sunyani, have been arrested for violating the Public Order Act.

Residents of New Dormaa in the Sunyani Municipality blocked the road in front of the Brong Ahafo Regional Hospital with logs, concrete blocks and burnt tyres at dawn last Wednesday to prevent motorists from Techiman, Wenchi, Kintampo from entering the central business district and vice versa.

The demonstration turned violent when the demonstrators arrested a police officer, who was on his way to work and locked him in a container.

They claimed the regional minister and the Bono Regional Coordinating Council had failed to construct the road which has caused many accidents and deaths.

After failing to convince the protestors to exercise restraint for authorities to find solution to the problem, police from Sunyani Municipality forcibly removed the road block to allow the vehicles to move.

Fifty-one demonstrators were arrested.  The rest took to their heels amidst shooting, as unconfirmed reports say three persons were shot in the melee.

This is the second time in a week that residents of the area have demonstrated against the neglect of the dual carriageway road, which they say has killed three pedestrians in recent times.

The recent knock down of a pedestrian named Karim, who is receiving treatment at the Brong Ahafo Regional Hospital, sparked the protests.

He said they would be screened and arraigned for violating the country’s laws.

The protestors claimed several appeals to the regional coordinating council and Ghana Highway Authority to complete the project fell on deaf ears.

Regional Police Commander DCOP Godfred Owusu Boateng appealed to residents to calm down, but they refused which forced the police to disperse them.