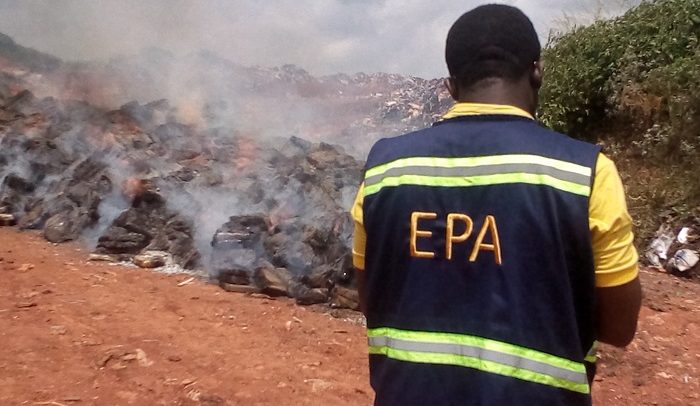 Teams from the Police, the Narcotics Commission and the Environmental Protection Agency on Monday supervised the destruction of 8,282 compressed slabs of cannabis at the Sunyani landfill site in the Bono Region.

The Fiapre Circuit Court in the Sunyani West District presided by her Honour Rita Amoayiwa Edusah gave the order for the illicit drugs to be destroyed, while an accused, Ayuba Ali,  a driver, and Amitus Soore, a driver’s mate still face prosecution at the court.

The accused were in charge of a KIA Rhino  truck with the registration number GR 2474- 16 and containing the  narcotics, and heading towards Burkina Faso but were arrested between Menji and Banda Nkwanta in the Tain District on June 5, 2020 by a team from the narcotics unit of the Ghana Police Service.

According to the police, the driver and his mate claimed possession of the drugs and were duly charged with unlawful possession of a controlled substance.

They have since been facing trial at the Fiapre Circuit Court.

Though the trial is still ongoing, the judge gave the order for the substance to be destroyed by burning on May 11, 2022, an order which has since been carried out.

The registrar of the court, Alfred Asamoah Boade, who together with officers from the aforementioned institutions supervised the burning, told DAILY GUIDE he was satisfied with the destruction process.

Deri Bounces Back With ‘Kumasi’