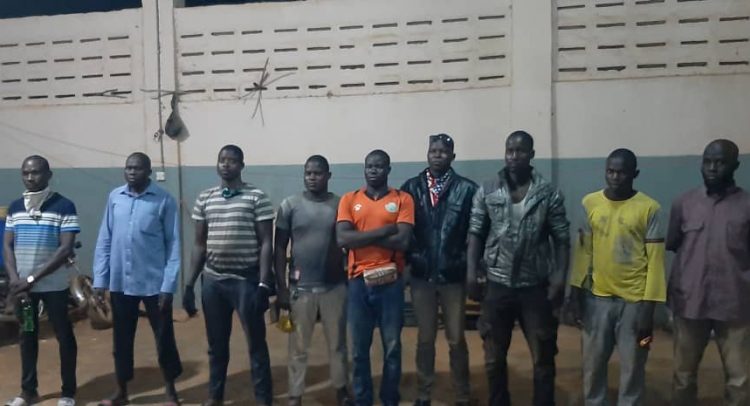 Nine persons including two Ghanaians and seven Nigeriens have been arrested by personnel of the Ghana Immigration Service (GIS) in the Akatsi North District of the Volta region for attempting to cross into neighbouring Togo using unapproved routes.

The nine who were using motorbikes were arrested at Yegbekorpe, a village near Ave-Atanvi in the Akatsi North District in the evening of March 20.

The Akatsi North District Chief Executive (DCE) Dr. Prince Sodoke Amuzu who confirmed the incident to DGN online noted that the suspects initially claimed they were travelling from Akatsi South, but further probing revealed they had travelled from Ashaiman in the Greater Accra region.

It also emerged that the two Ghanaians were the ones leading the Nigeriens who wanted to return Niger through Togo. A search on them revealed four of them were in possession of Republic of Niger identity cards.

All eight motorbikes being used for the journey have been handed over to the Police at Ave-Dakpa.

The seven Niger nationals were cautioned and made to return to Ashaiman while the two Ghanaians have been detained to assist with investigations into the mode of operation in smuggling people across the border.

This is the second time in a week that the migration officials of the Akatsi North District have prevented illegal immigrants from using unapproved routes to enter Togo from Ghana.

A week ago, 22 of such persons were also arrested in similar fashion.

Their motorbikes were also ceased and they were sent back to Akatsi South where they claimed they had traveled from.

Ghanas eastern boundary with neighbouring Togo is known for its countless number of unapproved routes. Its porous nature has always been a source of worry for Immigration officers .

The closure of all borders of Ghana as a result of the outbreak of COVID-19 seem to have increased the exploitation of the unapproved routes; a phenomenon which is threatening Ghanas fight against Covid-19. About six out of the 10 recorded cases of COVID-19 in the Volta region is as a result of this phenomenon.

$23 Million Worth Of Cocaine Seized At Dover Port, UK