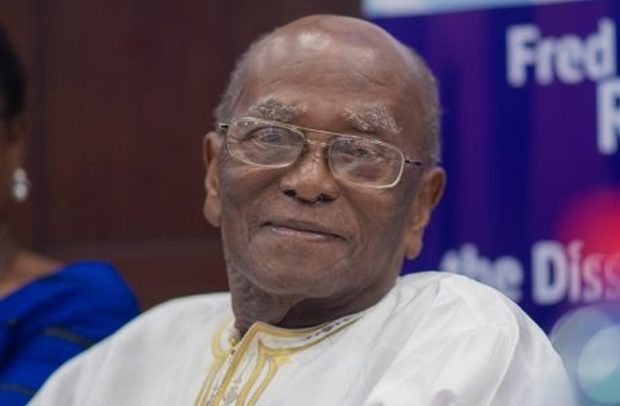 Throwing a “happy funeral” is a tradition in China to commemorate a person who has lived to a ripe old age and died peacefully from natural causes.

It is time to be joyful; a celebration of life and a blessing for the surviving family members. The case for holding such a funeral can be made for the late Prof Frederick Torgbor Sai, who passed away peacefully on September 17, 2019.

Prof Sai played his part on both the national and international scenes and made a name for himself and for Ghana.

I first met Professor Sai in the lead up to the 2000 Presidential campaign when I started working alongside her elegant and beautiful daughter, Madam Oboshie Sai Cofie, the late Freddy Ayim and Madam Elizabeth Ohene.

Madam Oboshie would invite us to her dad’s house on some occasions to continue working or share ideas or have a drink every now and then. It was at this time that I gave her the name, Lady Oboshie, for her nice pastries and delicacies.  When he was around, the Professor would sit in on our discussions and contribute actively.

When candidate Kufuor won the elections, Prof Sai was appointed the chairman of his transition team. It was then that I had the good fortune of working alongside him in great detail. I was the secretary to the Inauguration committee headed by the eminent Prof. Adjei Bekoe, whom I had to accompany every evening to go and brief and update Prof Sai on the preparations.

I must say I was most impressed by his attention to detail and quizzing. He was not afraid to ask questions; and difficult questions too, considering my committee was headed by such a very prominent person. I must say that the President-elect Kufuor was not spared the rigorous questioning from Prof Sai and on many occasions, the late Jake Otanka Obetsebi-Lamptey, Campaign Manager and I, had to stay behind to take more notes after the closure of the meetings.

It was an invaluable educational experience for me then to work alongside some of the best thinkers in the NPP or arguably in the history of the fourth republic of Ghana; Prof Sai, Prof. Adjei Bekoe, then Chairman Odoi Skyes, former chairman B.J. da Rocha and Prof. Adu-Boahene. It was indeed a privileged opportunity for me, looking back on it now.

However, the sheer magnitude of the man Sai only came to me recently in June this year, during a UN meeting in Beijing. I had been invited by the United Nations bodies to sit in on an event they were planning to host for him in Ghana and to celebrate his 95th birthday with him. At this meeting, I realized, like most Ghanaians, how little I knew of his contributions globally to the advancement of women, the United Nations, the population debate and Africa in particular. As the talk swirled around me, I was mesmerized and by the end of the meeting, I was one very proud Ghanaian.

I sent the following note to Lady O after that meeting in Beijing.

“A discussion was held with me today about a UN event in Ghana from June 23rd to 25th. They are coming to celebrate your dad – Big celebration. They are indeed proud of him. Did not know he was so treasured. He should be tutoring the new generation once a month, since his mind is still so sharp. I felt proud today and you must feel privileged to be his daughter” ….

I regret I did not make it to the ceremonies celebrating his 95th birthday but I am certainly very happy that I witnessed at first hand the high esteem in which the man and his work were regarded by the United Nations organs and the international community. It is Ghana’s loss if many of the young generation were unaware of the treasure that we had. Rest in peace Prof Sai, you made me proud to be a Ghanaian.

Ghana’s Ambassador to The People’s Republic of China