A Noble Deed By Noble Ladies 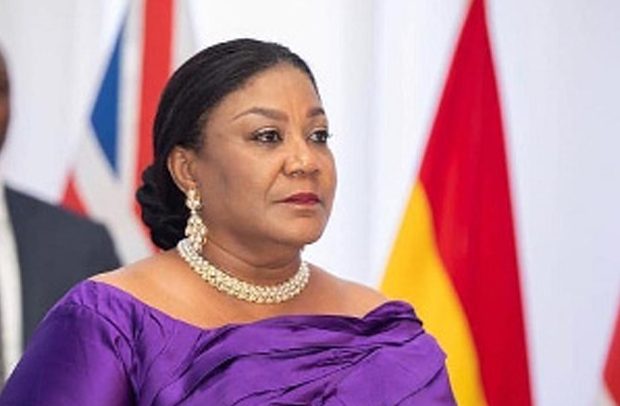 “SJ ASA” (literally: “it is finished”) is a common Twi expression to mock the belittle, especially where the victim brooks an ordeal or acquiesces to an abominable fate-to snub the interlocutor. (When the humble ex-President John Evans Atta Mills died, there was a memorable funeral cloth named ‘sj asa’ to honour him).

The Ntiamoa-Baidu Committee was set up in June 2019 to examine salaries and allowances paid to Article 71 office Holders and make recommendations. The 113-page document was received by Parliament which approved the recommendations.

Then came a backlash: First Lady and Second Lady to be paid salaries? Koku Anyidoho commented that if the independent Emoluments Commission had been set up (under President John Evans Atta-Mills) we would not be having this argument now. The Commission would have determined which categories of persons are public officers.

There was so much heated debate, too much of it, particularly with respect to the payment of salaries to spouses of the President and the Vice-President. Professor Kwaku Asare pointed out that the payments to First and Second Ladies violated the 1992 Constitution: “As high as the President is paid, his salary is only 63% of that of the CEO of Ghana Gas as quoted by the Ntiamoa-Baidu Enrolment Report… why then won’t Ntiamoa-Baidu violate the Constitution by adding the First and Second spouses to the pool of beneficiaries after noting that her predecessors had equally violated the Constitution by providing for people not specifically named under Article 71?

At Page 51 of the Ntiamoa-Baidu Report, one reads: “The Committee notes that neither Article 71 nor any of the provisions in the Constitution bestows benefits on spouses of Presidents and Vice Presidents. Similarly, no legislation mentions what the State should provide for spouses of Presidents and Vice Presidents”. Thus, there is no legal or constitutional basis for bestowing any such benefits on the spouses of the President and Vice-President, and pegging the salaries at the level of a Cabinet Minister. And Mahama writes: “Since this convention was established by the Rawlings administration, issues in respect of allowances the spouses of the President and Vice-President and spouses of former Presidents and Heads of State have largely been handled administratively and provided for under the budget of the Office of the President…” and Mr. Mahama thinks: “(t)he news, particularly at this time of austerity has generated some level of outrage among the populace, and I can understand the anger of those opposing the recommendations… and its subsequent approval by Parliament…”

Oh, so there had been an existing arrangement for the payment of allowances, allotment, quota, ration, grant to first and second ladies? Perhaps, it is the word ‘salary’ that haunts the antagonists. “Salary” originated from Latin “salarium” and in the Roman Empire, soldiers were paid in priceless salt (the white gold) instead of money. A study of the “phylogenetic tree” in Linguistics will reveal why “salaire” is the French word for “salary”.

The impression had been given that it was an innovation conjured by the current President to shore up the family purse for their selfish reason! Robin Hood and his Merry Men were alleged to live in Sherwood Forest (England) stealing from the rich to give to the poor. And was, Bakunin’s edict: right in his edict: “From each according to his faculties, to each according to his needs”?

The outrage? Lawyer Amaliba was on TV 3 chastising the First and Second Ladies, for being “insensitive” because some women cannot afford to buy “even salt” to season their food.

Lawyers forget their fees, dear Amaliba; one charged a client GH¢300,000 for a transaction, and it was not newsy. Why don’t lawyers share their stipends with the poor? Then! The First Lady, Rebecca Akufo-Addo returned ALL the allowances she had received since January, 2017, with a cheque displayed for all to see. Her Communications Officer Koko Bleboo wrote: “The First Lady, in consultation with the President of the Republic has decided to refund all the monies paid to her as allowances from the date of the President’s assumption of office, i.e. from January, 2017 to date, amounting to GH¢899,097.84. The First Lady has also decided not to accept any monies that have been allocated to be paid to her pursuant to the recommendations of the Ntiamoa-Baidu committee as approved by Parliament. She is doing this as a purely personal decision, without prejudice to the rights of others, and not to undermine the propriety of the process undertaken by Parliament”. The statement reminded Ghanaians that the First Lady did not solicit these allowances, but only “received that which exists and attached to her status, albeit informally”. What else should the First Lady say? Wherever she was working before  becoming First Lady; could she go back there again? A new status; a new environment; a new whiff of air!

Samira Bawumia, the Second Lady almost immediately issued a statement to announce that she was getting ready to refund all allowances paid to her since she assumed her position. She added that she would continue to deliver humanitarian interventions and initiatives in the area of health, education and economic empowerment, to the youth and women.

And Martin Kpebu, the initiator for “bail for all offences”, noted in “Newsfile”: “… millions of Ghanaians are suffering… they will be mad at the First Lady being paid such a huge sum of money when in the first place, everything that they enjoy is paid for by the taxpayer”. He adds, forthrightly or tongue-in-cheek: “The First Lady has exhibited good leadership in saving the public purse amidst economic hardship.” Chris Ackumey thought: “The First Lady has acted with grace and deserves to be applauded for doing so… she is witness to the plight of Ghanaians in this era of COVID-19… she is sensitive to (the nation’s fragile economy)”. O, now sensitive?

But what does Mahdi Gibril (former deputy National Organizer of the NDC) mean by dubbing the First Lady’s decision as “populist”?

He insists that the First Lady need not return only the allowances received intact. She also has to add the interest: then her wardrobe and travelling allowances. O-h-o-o. How petty can people be! Is this not nit-picking?

And NPP mounts pressure on Lordina Mahama to refund her allowances enjoyed as First Lady between 2012 and 2016. John Boadu: adds his voice to seek an amount totaling GH¢3.2 million! And Nana B puts the icing on the cake: if Lordina does not refund the money he would organize a demonstration against her.

For us, whether Lordina refunds her allowances or not, we stand at attention to salute the beautiful Rebecca and the dazzling Samira for this noble gesture. They have plastered the mouths of the “against” people. There’s everything noble about what they have done – and nothing ignoble!

How Are The Trees Doing?