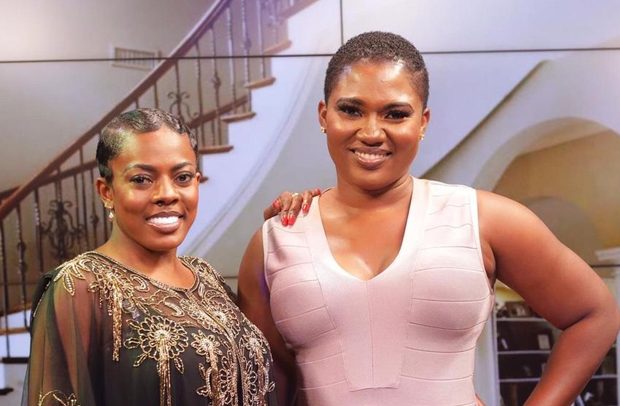 Nana Aba and Abena Korkor after the show on Saturday

General Manager of Ghone TV, Nana Aba Anamoah has responded to allegations by ex-TV3 presenter, Abena Korkor that she slept with some influential persons in Ghana.
In an interview on UTV’s United Showbiz program on Saturday night, she said it’s all lies. “She’s spewed a lot of lies about me,” she noted.
“Abena is on social media saying all sorts of rubbish about me and they were all falsehood. Typically, Ghanaians believed it…but these things I don’t talk about them because I don’t have the time. The only person I am worried about is my son because he sees them and it hurts him,” she added.
Nana Aba spoke after Abena Korkor made a surprising appearance at UTV’s studio to render an unqualified apology to her.
According to Abena, she was so sorry to have caused Nana Aba pain by saying stuff she shouldn’t have said when she suffered a relapse as a result of her bipolar issues.
“In my relapses, I said certain things that I shouldn’t have said that resulted in so many unnecessary things. I feel remorseful and wouldn’t want to go down the line fifty years and my story would be that people then wanted to build something with me I just dragged them now in a very negative way. I don’t want that to be my story,” she said.
“I hope today will be the beginning of something new. Something that will last. If she forgives me, this will not be the first time, she’ll be forgiving me. She has called me several times as a big sister and advised me on things I shouldn’t do anymore and how I should carry on with a brand I should create for myself. She has advised me on so many occasions. Sometimes things get out of hand and I say certain things. So before all of you, I want you to help me apologise to her,” she pleaded.
“In the past, I was giving ways out but I was scared to follow those things and I’m now ready to follow those things. Now I have more faith and conviction that my relapse that’s what happened was my relapse. I’m back to the Abena Korkor before the hullabaloo,” she added.
Nana Aba accepted her apology but had to clear the air on the allegations against her and her news anchor at Ghone, Serwaa Amihere.
She said she was disappointed by Abena Korkor’s action but holds nothing against her and will continue to help Abena Korkor if she avails herself.
“I am lost for words to be honest because I don’t know Abena from anywhere. When her first issue came she was then in UCC (University of Cape Coast), I looked for her number and I called her. I asked her not to give up and go back to school to write her exams. Abena is extremely intelligent so I was encouraging her,” she disclosed.
“Recently when she had her issues with the station she was working with, I called her back because I felt she was talking too much. I called her to my office and told her that let’s change the trajectory, let’s change the narrative… and talk about mental health. I asked her to bring a proposal and she did it within two days. She sent a brilliant proposal. I want us to do something on mental health, not just on TV but to go to schools and communities and call on the UN because we don’t take health seriously. And that’s what I wanted to do for her,” she further said.
But she added that “Three days later Abena is on social saying all sorts of rubbish about me and they were falsehood. Typically Ghanaians believed it…but these things I don’t talk about them. I don’t have the time. The only person I am worried about is my son because he sees them and it hurts him. And I was wondering: Abena me so I just forgot about it. A Plus called me I said it’s ok, let it slide. Then the girl that I nurtured, the girl no one believed in, the girl who has given all sweat and energy to become who she is today, Serwaa, Abena comes on Instagram, cooked some crap about Serwaa and for the next two-three weeks it’s about Serwaa.”
“Serwaa was in a lot of pain just because of what she started and I don’t know at what point we will stop blaming bipolar for it. She has apologised. I am not Jesus Christ, I am not God so I can’t pretend to hear her. I have nothing absolutely against Abena Korkor. She’s spewed a lot of lies about me and now she is apologising. She will always be a special human being to me. I just hope that she means her words going forward,” Nana Aba stated.