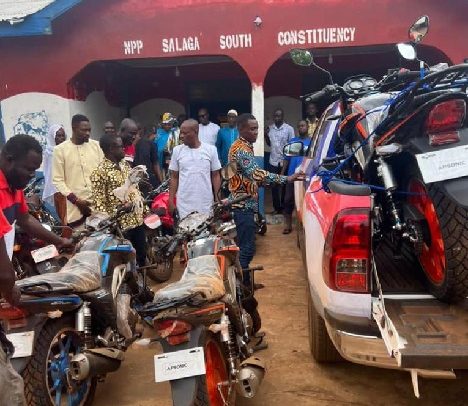 The Minister for Lands and Natural Resources and MP for Damongo, Lawyer Samuel Abu Jinapor, has donated a brand new Toyota Hilux Pick-up and five new motorbikes to the New Patriotic Party(NPP) Salaga South Constituency in the Savannah Region.

The donation is in fulfilment of a promise made to all the seven constituencies in the Savannah Region by the compassionate and enterprising lawmaker tailored at enhancing effective day-to-day operations of the party’s activities in solidifying the grounds in reclaiming the seat marginally lost in the 2020 general elections.

The donation was aimed at facilitating the work of the Executives, especially in remote parts of the Constituency to propagate the monumental heights chalked by the NPP-led government.

The Constituency Executives and the East Gonja Municipal Chief Executive, Richard Broni, who received the donation were overwhelmed at the continuous kind gesture.

They noted that the timely donation will go a long way to ameliorate efforts by the party in the Region in accomplishing the party’s crusade of breaking the 8 as the campaign for 2024 gets intense.

The East Gonja Municipal Chief Executive, Richard Broni, admonished the party in the Constituency to rather work in unison with the donation than divide themselves with same.

The Salaga South Constituency has become the fifth constituency out of the seven to receive the wholehearted gesture from the Damongo legislature.