Accident Kills One In Effia-Kwesimintsim 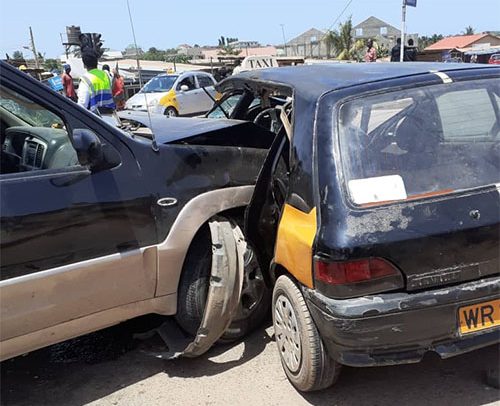 One person lost his life in an accident which occurred yesterday involving a taxi cab and a private vehicle.

The gory accident happened at the Adientem Junction on the Anaji-Appollo highway in the Effia-Kwesimintsim municipality of the Western Region.

The driver of the taxi cab whose name was given only as ‘Red’ got trapped in the taxi cab and was confirmed dead when he was later removed and rushed to a nearby hospital.

According to eye witnesses, the private car was heading towards the Appolo end of the highway from the ‘I Adu’ junction area.

The taxi cab was however, trying to cross the highway into the Kwesimintsim Township from the Adientem junction.

The eye witnesses claimed that unfortunately for the taxi driver, the private vehicle which was allegedly speeding, rammed into the taxi cab killing the taxi driver on the spot.

Meanwhile, the driver of the Mazda private car was said to be receiving treatment at the same hospital.

According to sources, there was a power outage at the area which resulted in the traffic lights not functioning.

“So instead of the traffic lights directing the movement of vehicles, the drivers at that moment had to rely on their judgment to cross the junction”.

“So probably the wrong judgment on the part of the two drivers resulted in the accident”, they asserted.