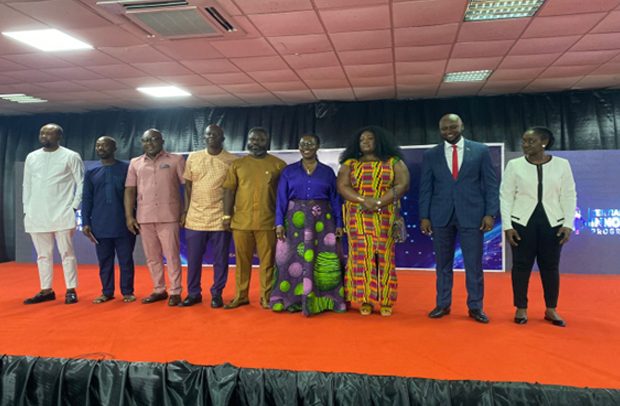 A group picture of the Minister of Communication and Digitalisation and other stakeholders.

MINISTER OF Communication and Digitalisation, Ursula Owusu-Ekuful, says over 5,000 jobs have been created in the digital sector.

Speaking at the launch of the Tertiary Digital Innovation Programme which coincided with the 5th anniversary of the Ghana Digital Centres Limited, the sector minister said, “The Accra Digital Centre has boosted job creation with a little of 5,000 direct and indirect jobs so far.”

She further noted that about 15,000 young people have acquired various forms of digital skills training since the centre became operational in 2017.

Mrs. Owusu-Ekuful said this was made possible with funding support from the World Bank.

She said the Accra Digital Centre was created as part of the government’s effort to bridge the unemployment gap in the country.

It has also driven the knowledge-led socio-economic growth as well as Information Communication Technology skills for self-sufficiency, she stated.

She, however, noted that the innovation hub is also currently been supported by the World Bank and has helped over 30 new start-up companies.

“We are hoping to scale it up with the Ghana Digital Acceleration Project with $20 million support from the World Bank for startups working with the Venture Capital Funds, Ghana Employment Agency, and other institution in the sector,” she added.

Chief Executive Officer (CEO) of the Ghana Digital Centres Limited, Kwadwo Baah Agyemang, said data from the Institute of Statistics, Social and Economic Research (ISSER) indicates that only 10 per cent of graduates find jobs after their first year of completing school.

“Additionally, about 90% of final year projects worked tertiary students are left to gather dust on library bookshops due to inability of tertiary institution to fully commercialise research,” he stated.

Mr. Agyemang said to address this challenge, the Ghana Digital Training System has partnered with Make IT in Africa, a programme implemented by the German International Cooperation (GIZ) and others, to implement the Tertiary Digital Innovative Programme (TDIP).

“The TDIP has been designed to foster digital innovation and entrepreneurship by providing support for tertiary students and recent graduates to build technology driven project and research works into innovative start-ups and solutions that addresses national developmental challenges” he stated.

However, he said to ensure inclusivity, the programme will grant 30 per cent of female participation to advance the girls ICT agenda by the communication minister.