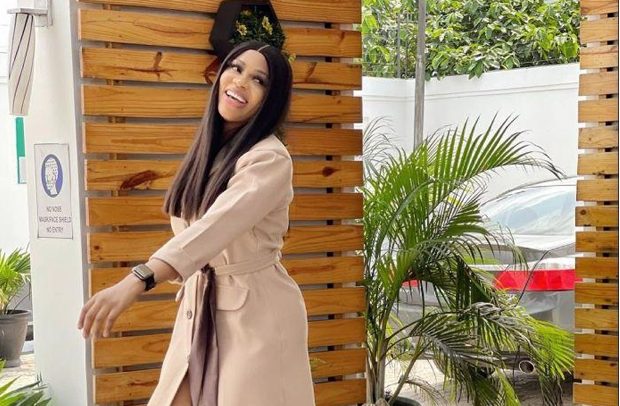 Merit Gold, the actress who allegedly had a conversation with Prince Kpokpogri in the leaked voice note where he talked about his sexcapades while dating Tonto Dikeh, has broken her silence.
In a post shared via her Instagram page on Thursday, September 23, 2021, the up-and-coming actress said she was used.
According to the actress, Kpokpogri only wanted to use Dikeh’s influence to get famous.
She went on to corroborate Dikeh’s claims about the sex tapes and photos of several celebrities in Kpokpogri’s possession.
She also confirmed that Kpokpogri had the sex tapes of popular Instagram influencer, Janemena.
It didn’t end there as she apologised to her friend who she identified as Chioma for mentioning her name in the voice note.
“Now i realise my mistakes and I’m deeply sorry everyone pis i was used by prince kpokpogri because he told me he’s done with king Tonto, all he wanted from her was just to make himself famous and of wish he has achieved. But still my heart keeps beating me against what i did to rny role model. Pls (please) you all should kindly forgive me and also help me beg king Tonto to forgive me and to prince kpokpogri see you can’t eat ur cake and have it. You have a lot of ladies nude videos and pictures in your phone and i know you with that for years ‘-not just that you can’t deny having sex with married young ladies. King Tonto was actually right when she said sornething about the sex tape you have with you, not only Jane Mena but so many ladies out there that you slept with. please I want to use this medium to Apologize to my sweet baby girl @chioma to pls forgive me also for mentioning her name in the voice note. i love you so much my darling It was your jealous friend teddylicious that stole the voice note between me and prince from my phone. It was suppose to be confidential but God knows why everything happened. I love you so much my role model @king T you are a strong woman.
On Wednesday, August 18, 2021, a leaked audiotape surfaced online where a conversation reported being that of Kpokpogri and a lady (Merit Gold) talked about him cheating on Dikeh in their house.
The conversation also highlighted the movie star and her unrepentant drinking and smoking habits.