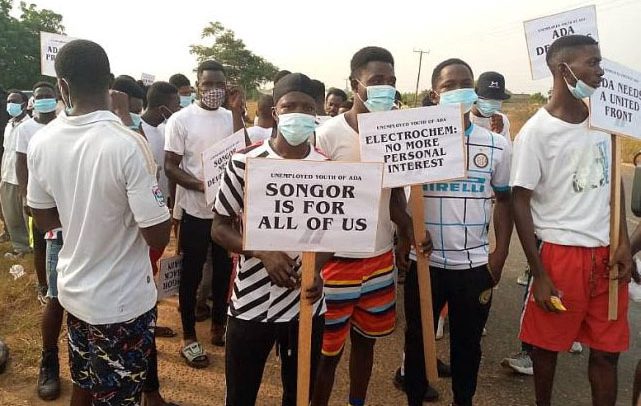 Some of the youth with placards

THE DISTRICT Chief Executive of the Ada West District, A. L. Akrofi, in the company of the chiefs and the youth of Ada have rallied support for McDan’s ElectroChem Ghana Salt mining project at Ada Songor.

The group, referred to as Progressive Youth of Ada, on Tuesday, embarked on a solidarity walk after which it presented its petition to the assembly, demanding the start of work on the mining project.

According to the youth, the development of the Songor Lagoon promised great employment opportunities for them, hence their support.

The DCE therefore advised all persons staging protests and calling for the revocation of the Electrochem Ghana agreement on the Ada Songor project to consider the opportunities it held for the youth.

According to him, that was a project the chiefs and the youth had always supported since it promised the creation of more jobs for the jobless youth.

The Songor Lagoon has been a source of fishing and salt mining for the inhabitants of Ada and outlying areas.

The DCE indicated that “ElectroChem had satisfied all requirements under the mineral act and this project was approved by Parliament. There was also a very extensive consultation that represented the Ada people so this kind of propaganda or whatever politics at this stage would not wash this time because we are fully behind McDan.”

In October 2020, Electrochem Limited was granted a lease to mine salt at the Ada Songhor Lagoon after Parliament ratified a lease concession.

It granted Electrochem Ghana the mineral right to mine in the Songhor Lagoon for 15 years, subject to the mining laws in Ghana.