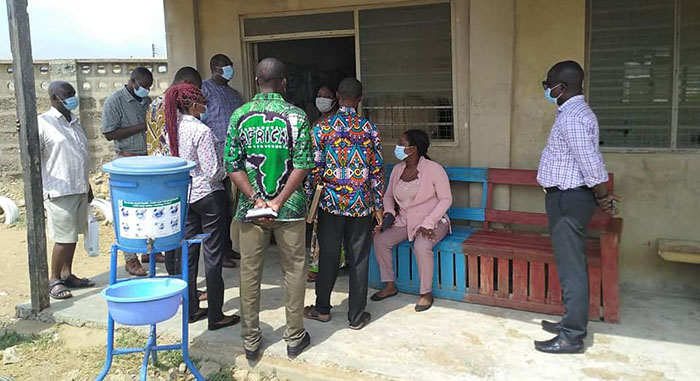 Officials of Tema Education Directorate, TMA at the school to assess the situation

The Tema Metropolitan Assembly (TMA) is to give a facelift to the Manhean Anglican Primary School in the metropolis to provide conducive environment for teaching and learning.

The Metropolitan Chief Executive (MCE) of TMA, Felix Mensah Annan-La, who made this known after leading a team from the Tema Education Directorate to inspect the state of the school on Monday, said the structural integrity test was underway to determine whether to pull down the school and build new structure or to renovate the existing structure to bring relief to the pupils.

The unfavourable conditions under which the pupils study compelled the assembly to move them to another structure to avoid any disaster and allow for the construction of new classroom block or renovation of the existing one.

The school, which was constructed over 60 years ago, has opted to run a shift system until the completion of the school or otherwise.

The MCE said the assembly has tasked its Engineering Department to conduct structure integrity test of the existing school building to determine the way forward for the assembly.

The MCE was optimistic that the assembly would give the school the needed facelift and consequently improve the standard of learning in the school.

According to him, the government was concerned about projects that matter to the people.

He said the assembly was not only determined to improve the human and educational well-being in the metropolis, but also help to produce brilliant students who would be worthy future leaders.

Mrs. Bernice Ofori, the Tema Metro Director of Education, for her part, appealed to the assembly to complete the school before the rains set in since “when it rains that means the children would not be able to have classes.”

She said the security situation in the school was not the best since miscreants hijack the school in the evening after the children had closed.

She, therefore, called for security to be provided in the school.