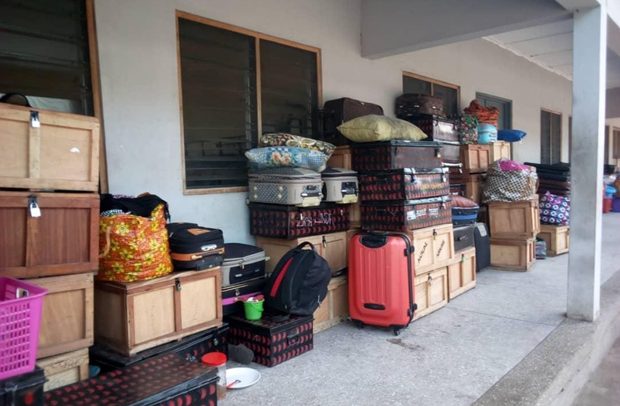 The Adaklu Waya Senior High School (SHS) in the Adaklu District of the Volta Region is facing serious challenges including overcrowding at the Girls Dormitory.

This came to light when Member of Parliament for Adaklu, Kwame Agbodzah, visited the school to break the ground for construction works on an eight-unit classroom block to commence.

The MP described the project, which he is funding, as a “knowledge hub,” estimated to cost GHC1 million.

The Ghana News Agency observed when the MP was taken round the school that hundreds of mattresses, trunks, chop boxes, buckets and gallons belonging to the students were packed on the veranda of the Girls Dormitory at the mercy of the weather and thieves.

The Headmaster said the items were packed there due to the non-availability of space in the dormitory, which was also not fenced.
He said only three kitchen staff, including the Matron, were cooking for the more than 1000 students and appealed to government to beef up the kitchen staff strength.

Mr Agbodzah expressed worry about the situation and said it was a crisis that needed urgent attention.

He said the students and teachers also deserved to enjoy the good facilities being enjoyed by their colleagues in other schools, adding that academic excellence could not be achieved in such an environment.

“This is a disincentive to teaching and learning,” he said.
The MP, therefore, appealed to government to go to the aid of the school before the situation degenerated.

He said he was working hard to make a positive impact on the lives of pupils and students in the District.

A lady teacher, who pleaded anonymity, told the GNA that there was no security man guarding the Girls Dormitory when the students left for classes.

She said a makeshift structure, which served as bathhouse, was not fit for purpose because during the dry season when the bushes dried up, the girls were exposed to passers-by when they were taking their bath.

2 Die In Car Accident, One Electrocuted