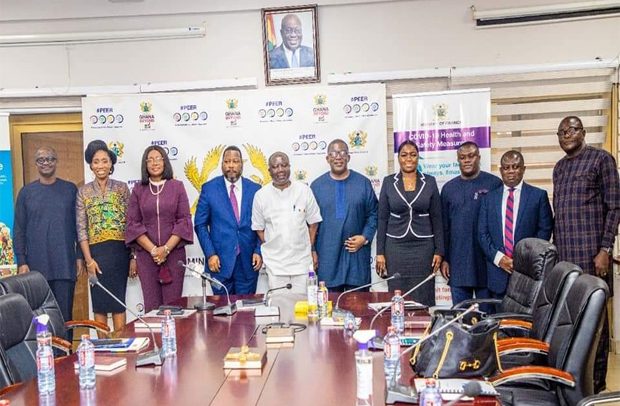 The board members with the Finance Minister

A SENIOR Solicitor, Philip Addison, has been appointed chairman of the reconstituted board of the Ghana Infrastructure Investment Fund (GIIF).

Ken Ofori-Atta, Minister of Finance, who swore in the new board, urged the 9-member team to run the board with a strong corporate governance approach without recklessness and undue political interference.

According to Mr Ofori-Atta, he wants the GIIF board to build on the impressive records of the fund and take it to the next level.

GIIF is a $325 million infrastructure investment vehicle that was established by Government to invest and develop infrastructure assets in the country.

Mr. Ofori-Atta said the GIIF had had a productive first four years with a portfolio of 12 investments totaling $290 million, and pledged his commitment to provide the required oversight and strategic direction for the fund.

He called on the chairman and his board members to provide day-to-day oversight to help unlock new sources of finance and investment for the country, pointing out that for each dollar invested, GIIF had made 10 dollars.

He also charged the board to work closely with Ghanaian institutions in both public and private sectors to raise the infrastructure investment skills levels.

According to him, the lack of fully developed infrastructure remained one major impediment to economic development of Ghana, asserting, “It also negatively affects the quality of life of our people.”

The Minister said the GIIF would help the country to mobilise and invest alongside the private sector to drive Ghana’s infrastructure agenda.

Mr. Ofori-Atta disclosed that the government was utilising GIIF’s technical and private sector skills to drive government initiatives and mentioned the refinancing of the infrastructure debts in the power sector, Agenda 111 and the Accra-Tema Motorway.

He noted that the fund had helped to ensure key infrastructure assets that remained under Ghanaian ownership and control and reduced reliance on foreign investors.

Mr Addison, in a remark, spoke highly about the GIIF, describing it as an important vehicle through which “the government can drive this agenda.”

For him, the importance of helping Ghana to address its infrastructure deficits remained a vital part of the government’s agenda, and pledged the board members’ commitment to achieving aims.