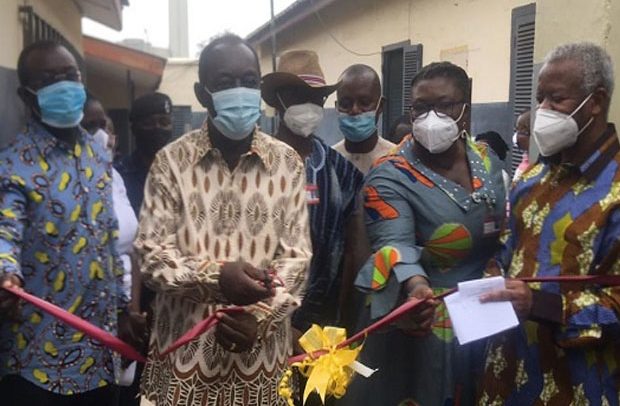 FORMER Defence Minister, Dr. Kwame Addo-Kufuor, has renovated the forensic ward, popularly known as the Special Ward at the Accra Psychiatric Hospital, which had for long been in a deplorable state.

He was joined last Friday to cut the tape for the commencement of the use of the facility by his son Kwame Addo-Kufuor Jnr. and Dr. Kwesi Osei, Chief Executive Officer of the Mental Health Authority as well as Dr. Pinaman Appau, Director of the Accra Psychiatric Hospital among others.

In her remarks, Dr. Pinaman Appau stated that the buildings, toilet facilities etc. of the ward had deteriorated so much that “they were not safe for our patients and staff.”

The ward, she said, is part of the original infrastructure of the hospital built in 1904 and has since then not had any major renovation.

Efforts through a dinner to raise funds to renovate the place in 2018 she said did not yield enough for the project and was only able to do so for the bathroom and toilet block.

The renovation of the facility by Dr. Addo-Kufuor, she said, was a fulfilment of a promise he made earlier.

Dr. Osei referred to how at a point the facility was faced with congestion, adding that designed for only 60 patients—it took 260, the bed situation standing at 20.

Dr. Osei announced plans to roll out a project, “Samaritan Project”, which would have officers from the authority pick up mentally challenged persons from the streets and transfer them to the various rehabilitation facilities for the necessary action.

Dr. Addo-Kuffuor said he was motivated to carry out the project by the sight of the many mentally challenged individuals, who shabbily attired, approach vehicles to beg.

He said reports from a research he carried out revealed that the facility had “very serious budgetary problems, inadequate staff resources and ineffective management.”

He suggested that the hospital should be relocated to a serene area like Prampram where patients would have a less noisy atmosphere to receive treatment.

He assured that government was putting up accommodation in the area and so staff of the facility would be given the needed support should they decide to heed his advice.

The forensic ward of the Accra Psychiatric Hospital is the only designated forensic ward in the country where patients who are referred to the facility from the courts, prison cells etc are sent for mental assessment and treatment.