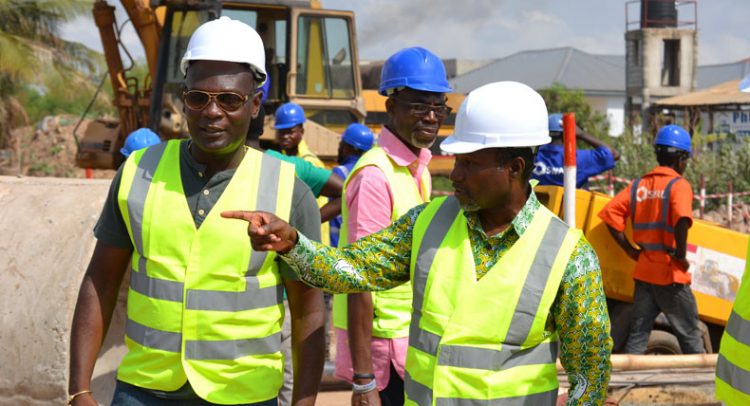 The contractor conducting the MCE around

Alexander Daniel Nii-Noi Adumuah, Municipal Chief Executive(MCE) for Adentan in the Greater Accra Region, has indicated that the usual heavy traffic that is found along the Adentan-Madina highway will soon be  an experience of the past following ongoing construction of connecting routes within the municipality.

In recent times, the assembly has been confronted with finding lasting solutions to public outcry on the poor nature of roads within the municipality which compels residents to move onto the highways to drive to their respective destinations.

The connecting routes, according to him, are expected to serve as alternative routes creating opportunities for easy access for residents within the municipality or when driving out of the municipality.

Speaking to journalists during a 3.5 km road inspection tour from School Junction-Otanor Junction (Adjiringanor), East Legon, Accra on Thursday, he indicated that the assembly is worried about the heavy vehicular traffic on the highway and time lost to motorists and people moving to do business, among other worrying setbacks.

“The President, Nana Akufo Addo is aware of the immense benefits of good road network within every municipality and its enhancement for the country’s vision of ‘Ghana Beyond Aid’ and will therefore work to eliminate such frustrations,” he stated.

The MCE, however, lamented the activities of squatters and real estate developers who most often indiscriminately place containers and kiosks in waterways in a deliberate move to encroach on reserved lands.

The MCE while commending a number of the squatters who voluntarily removed their containers and kiosks from encroached sites, warned developers to stay off government reserved lands adding that the assembly would soon move out on a massive demolition exercise.

“The assembly has no compensations to pay to individuals or developers who encroach on public lands or buffer belts; let us in the spirit of civility avoid such areas,” he admonished.

The contractor who won the admiration of the assembly and some key residents recently for the timely completion of the Aviation road which links Third Gate – Madina and East Legon, indicated that his company’s focus, among others, is to build his brand as a wholly Ghanaian company which is as good as any of its foreign counterparts.

“Barely four weeks into the contract duration, can one tell from our work that we are ready to deliver an excellent job for mother Ghana” he remarked.

The road when completed will have three traffic lights located along the stretch, pedestrian walk way, street lights among other modern features.