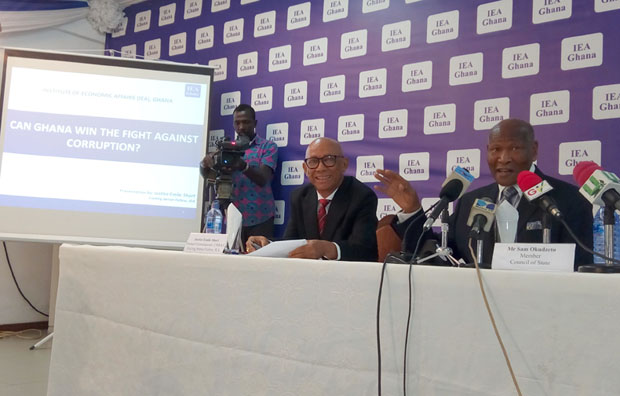 Justice Short (left) and Mr. Okudzeto seated at the event

FORMER COMMISSIONER of the Commission on Human Rights and Administrative Justice (CHRAJ), Justice Emile Short, has called for the redesigning of public institutions in the country in the fight against corruption and abuse of public office.

Justice Short, who is a visiting Senior Fellow of the Institute of the Economic Affairs (IEA), said redesigning the institutions will make them less vulnerable to corrupt practices.

He was speaking at a roundtable discussion on corruption organized by IEA on Wednesday in Accra under the theme: “Can Ghana Win the fight against Corruption?”

According to him, a lot of Ghana’s institutions have been deliberately set up to promote and facilitate corruption.

He stressed that “the system has been designed in such a way that unless you pay bribe, you can’t get what you want.”

He perceived the Police Service, Judiciary, Office of the President and the Ghana Immigration Service as the four most corrupt institutions in the country.

Mr Short emphasized that redesigning the institutions and replicating the paperless port system across other institutions will yield results.

According to him, successive governments over the years and the current Akufo-Addo-led New Patriotic Party (NPP) government have not, effectively, tackled the issue of corruption due in part to electoral reasons.

In his opinion, winning the war on corruption will require the government to spearhead the implementation of the Ghana Anti-Corruption Plan.

“Massive public education, prevention and investigation as contained in the anti-corruption plan, are key to fighting the canker,” he said, calling for the establishment of integrity clubs in schools and the passage of the Right To Information (RTI) Bill.

He called also for a revival of the constitutional review process by the current government to pave way for the amendment of Article 88 of the 1992 Constitution to provide for the appointment of an independent Attorney General to replace the Special Prosecutor.

He also called for the granting of an independent status to the Economic and Organized Crime Office (EOCO) to separate it from the office of the Attorney General.

Justice Short observed that advocacies on corruption should draw attention of politicians and the masses to how the quantifiable social and developmental projects government could have undertaken are stiffled due to the stealing of state funds by a handful of individuals.

A member of the Council of State, Sam Okudzeto, who chaired the discussion, called for a national consensus in the fight against corruption.

“This fight against corruption is in the national interest and therefore, we should put our political colors aside and tackle it as a national issue,” he said, warning that corruption is a cancer which needs serious surgery to be cured.