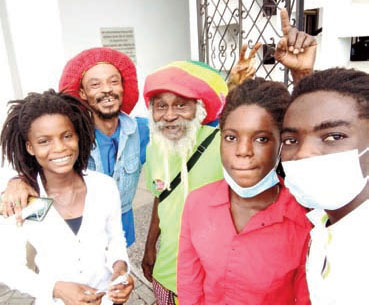 The Attorney-General and the Board of Governors of Achimota School want the High Court ruling on the admission of Tyrone Iras Marhguy, one of two Rastafarian students, set aside.

The A-G, together with the Achimota School pray the Court of Appeal for an order for the Students to abide by the rules of the School that they chose to attend.

The boy, earlier this year sued the Achimota School Board of Governors, the Minister of Education, Ghana Education Service, and the Attorney General for refusing to enroll them.
The school at the time said the boys had to cut their dreadlocks because it was
at variance with its rules and regulations.

The Human Rights Division of the Accra High Court presided over by Justice Gifty Agyei Addo on May 31, 2021, however, ruled that the fundamental human rights of the two students cannot be limited by the rules of the school.

The Judge held the view that Achimota School and proponents, including GES and the A-G failed to justify why the two students should not be admitted.

She premised her position on the fundamental human rights guaranteed under the Constitution of Ghana, 1992, especially the boys’ rights to education and their rights to express their religious freedom.

However, the A-G and the School argued that the High Court erred when it held that the rules and regulations of the school relating to the maintenance of uniform appearance by students in a public secular secondary school was unlawful and interfered with the manifestations of their religious rights.

They said the Trial Judge misdirected herself in law in failing to duly consider the consequential obligations entailed in its decision on the proper and effective management of the public secular secondary schools by the Appellant and the School administration.

“The trial judge erred in law by failing to examine the legitimacy of the Appellant’s case regarding the impact of the uniform rules on the proper and effective education of children and young persons at Achimota School,” they said.

They said the Judge erred when she held that the regulation of the 1st Respondent requiring that students kept their hair low amounted to an illegal and unconstitutional attempt to suspend the manifestation of the Applicant’s guaranteed freedom to practice and manifest his religion….

The learned Judge erred when she held that Respondent’s actions of asking the Applicant to step aside during the registration process was a violation of his right to dignity especially when the 2nd Respondent had disputed the veracity of that fact.
GNA

I Will Beat You -3Music Awards Boss Threatens Shatta Wale