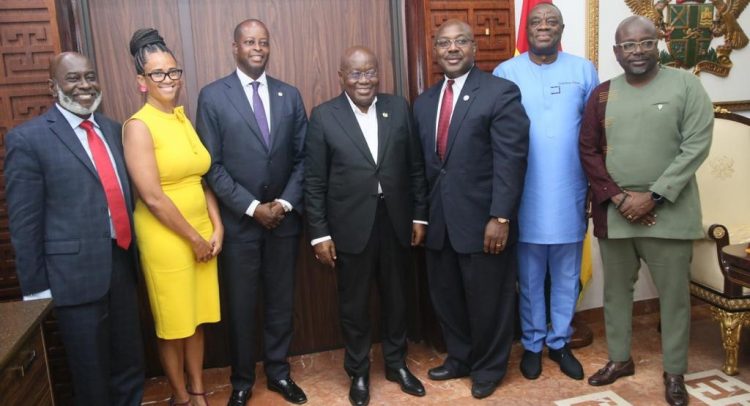 President Akufo-Addo says government is more than determined to complete the construction of one hundred and eleven priority hospitals across the country (Agenda 111) which is ongoing and local production of vaccines.

He believes this would go a long way to help meet the health needs of the country.

This was when a delegation from the Howard University called on him at the Jubilee House, on Wednesday.

He therefore urged the university to partner government to make the two projects a reality.

“There are two important long term consequences from the COVID experience for us. First of all, we discovered that the healthcare system in Ghana was seriously deficient. Virtually half of the country had no access to district hospitals. So we are engaged in a big programme of providing district hospitals for over a hundred and one districts” President Akufo-Addo said.

“We have two hundred and sixty districts in Ghana so a hundred and one, roughly, we are talking about 40 to 45 percent of districts which don’t have a direct and properly equipped district hospitals. That is one of the things that emerged from the pandemic” he added.

On the issue of vaccine production, the President indicated that “we don’t produce our own vaccines and we had to have our hands out begging countries like your own (USA) to help us out. It took some time before they were able to do so.”

He therefore noted that “we can’t afford that again so the sooner we developed that capability to make our own medicines not just for the COVID, but for other areas as well, the better it will be for our future.”

“We are fully engage in that so that may be an area of interest when you meet with the Minister (for Health), to see to what extend you can be involved in that exercise” the President noted.

On his part, President of the Howard University, Dr Wayne Frederick said he has great interest in healthcare beyond his work a President of a university.

He is therefore looking forward to engaging the Minister for Health (Kwaku Agyeman-Manu) to find ways through which Howard University can collaborate with Ghana to promote sustainable health service in the country.

Founded in 1867, Howard University is a private research university comprised of 13 schools and colleges. Students pursue more than 140 programs of study leading to undergraduate, graduate and professional degrees.

The University operates with a commitment to Excellence in Truth and Service and has produced one Schwarzman Scholar, three Marshall Scholars, four Rhodes Scholars, 12 Truman Scholars, 25 Pickering Fellows and more than 165 Fulbright recipients.

Howard also produces more on-campus African American Ph.D. recipients than any other university in the United States. Howard is a leader in STEM fields.

The National Science Foundation has ranked Howard as the top producer of African-American undergraduates who later earn science and engineering doctoral degrees.

For more than 150 years, the Howard University School of Law has served as an advocate for social justice and as an architect of social change.

It has produced more than 4,000 social engineers including the first African-American Supreme Court Justice, noted legislators, civil rights attorneys, mayors, and public officials across the United States. It is the No. 1 law school for African Americans ranked by preLaw magazine.

The University’s motto: “Veritas et Utilitas”, Truth and Service, represents a key part of our identity. The more than 10,000 undergraduate and graduate students dedicate hundreds of hours each year to service in nearby LeDroit Park, around the nation and throughout the world.