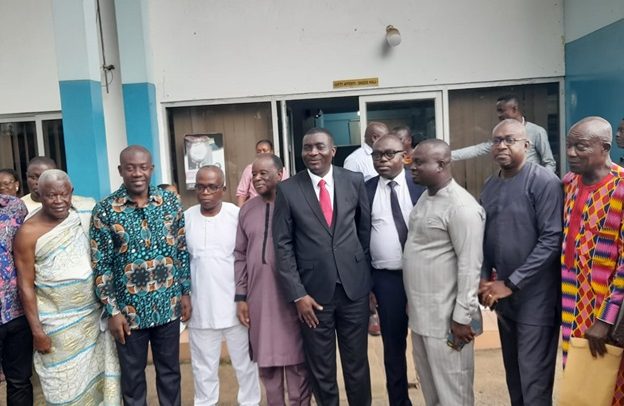 Minister of Information in a group photo with the Executives of PRINPAG, others

The Chairman of the National Media Commission (NMC), Yaw Boadu Aye-Boafo has sworn into office newly elected executives of the Private Newspaper and Publishers Association of Ghana (PRINPAG), calling on them to be diligent in the discharge of their duties.

According to him, the media has oftentimes been irresponsible in their work, which defeats journalistic standards expected of them.

He said, “It is important for us as Ghanaians to understand that the legal framework within which we are operating in terms of the media is that of social responsibility and not libertarian. Libertarianism suggest that you can say whatever that you want to say, but Libertarianism demands that you must be responsible in the things you want to say, which means that you are free to make a comment or a statement but after you have made that statement take responsibility for it because somebody is going to ask you questions as to why you did that, and you cannot run away from your basic responsibility.”

He, therefore, appealed to the media to be diligent and thoroughly investigate matters before it to establish all the fact in order to defend themselves in word and exercise civility in the use of language in order not to destroy people.

In an address, the President of PRINPAG also bemoaned the high state of unprofessionalism exhibited by the media in recent times regardless of the high journalistic standards of balance, fairness and accuracy expected of media practitioners.

He said, “One of the problems that leads to the Ghanaian media dwindling in their influence and thus suffering patronage crisis is our reckless and unprofessional conduct where we decide to ignore our ethics, and here we urge all our members to always endeavour to exhibit high professional duty and strict adherence to high journalistic standards.”

He also urged individuals and organisations aggrieved by the work of journalists to use appropriate forums for redress instead of resorting to attacks, which undermines the development of freedom of speech and development of the media.

“A bad press is better than none at all and as a human institution, the media are prone to errors and excesses but when that happens, we should express our disapproval using the basic tenets of the rule of law to deal with the situation,” he added.

The President also charged the government to refrain from using crude forms of handling the media in contemporary times and engage more with the media associations “to save the media from falling into an abyss.”

Amongst some of the achievements mentioned under his leadership were the drafting of a constitution for the Association, and a credible database for all members nationwide.

Present at the ceremony was the Minister for Information, Kojo Oppong Nkrumah, past executives, members of the NMC and other notable individuals in the media fraternity.