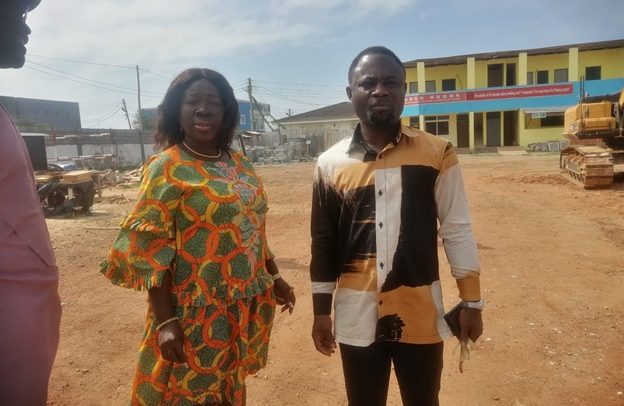 Kwabena Mintah Akandoh and Elizabeth Ofosu-Adjare at the site

The Minority in Parliament has criticised the government over delay in reconstructing the La General Hospital two years after the dilapidated building of the health facility was demolished.

Ranking Member of the Health Committee of Parliament, Kwabena Mintah Akandoh, who raised concerns about how reconstruction is being handled, said it appeared the government has no intention of putting up the structure.

Speaking to journalists during an inspection of the site by some members of the Minority yesterday, the NDC MP for Juaboso called on the government to expedite action on the €68 million project.

“Absolutely nothing is going on here. What is even hurting is that immediately we entered here we saw them [some construction workers] packing materials at the site to an unknown place, and leaving us here,” he bemoaned.

“It is about time the President and his Health Minister were candid to the people of this area. They are not being treated fairly at all,” Akandor added and questioned where the residents would access health care.

For him, it would have been good for the old structure to have been left to respond to the residents’ health needs.

“Making the news is not our target, but if we have to come here 100 times, we will come here to get the job done. And we will continue to come here until this project is fully executed,” Mr. Akandor submitted.

He indicated that the Health Minister’s attention had been drawn to it on the floor of Parliament through questions and answers, intimating that the unnecessary delays were unacceptable.

The NDC MP said the project, which is being financed by a credit facility from Standard Chartered Bank of the United Kingdom, with an export credit guarantee from Sinosure of the People’s Republic of China, is supposed to be undertaken by a Chinese company, Poly Changda.

The health facility was formerly known as the La Polyclinic, and the structure was in a deplorable state, compelling the government to pull it down.