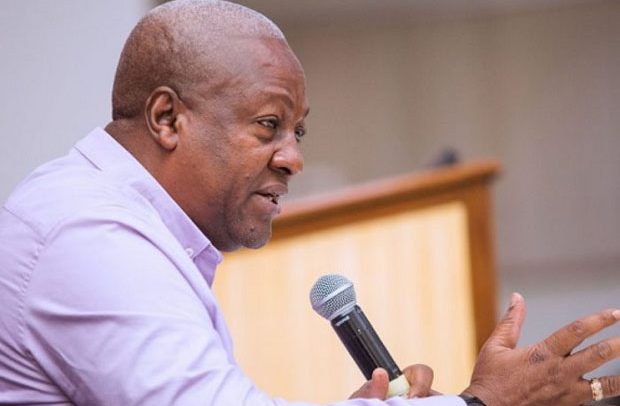 The Judicial Service Staff Association of Ghana (JUSAG) is butting heads with former President John Dramani Mahama for his continuous attack on the judiciary.

President of JUSAG, Alex Nartey, said Mr. Mahama’s recent attack on the judiciary and the Chief Justice, Kwasi Annin-Yeboah was borne out of confusion, asserting, “The fact that you disagree with the judgment does not mean the judge who rendered that decision has no integrity.”

Ex-President Mahama badmouthed the judiciary and its head last Sunday when he claimed that the image of the country’s judiciary has badly deteriorated and that Ghanaians openly make mockery of the justice system and of the justices.

“If people are not poking fun about politics and inducement being used to sway the hand of justice in the Lower Courts, then it is poking fun and making statements about the 7:0 of the unanimous FC verdicts which mostly involve cases of a political nature in our Supreme Court. This is an unfortunate but serious development,” Mr. Mahama asserted.

Mr. Mahama was speaking at the opening of the 2nd Annual Lawyers Conference of the opposition National Democratic Congress (NDC) during which he stated there was an urgent need for the judiciary to work to win the trust and confidence of the citizenry to erase the “widely-held perception of hostility and political bias in legal proceedings at the highest court of the land.”

However, reacting to claims by the ex-President, the JUSAG President said Mr. Mahama needed not confuse his disagreement with a court judgment and the integrity of judges, describing his attack on the Chief Justice (CJ) as unfair.

“I think that such a statement is not fair to the judiciary, and I think he must be fair to the Chief Justice,” Mr. Nartey told Citi FM.

According to the JUSAG President, the CJ had not changed any of the procedures of the court or altered any of the laws based upon which judges arrived at their decisions.

“The fact that you disagree with the judgment does not mean the judge who rendered that decision has no integrity,” Mr. Nartey stressed, and added that the laws provided avenues for dissatisfied parties to challenge judgments from courts.

He continued, “When nobody has prevented you from resorting to legally prescribed means to capsize or turn the designs of the court that are made based on the laws of the land… you are being unfair.”

“The mere fact that the parties before the court disagree on the decision of the court does not mean something wrong has been done that cannot be cured by law,” Mr. Nartey noted.

Before the JUSAG President’s reaction, a retired Court of Appeal judge, Justice Isaac Douse, had cautioned former President Mahama not to drag the image of the Supreme Court in the mud.

According to him, such actions have the propensity to jeopardise the country’s democracy, while urging the former President and his likes who always seek to denigrate the judiciary to learn from history.

“It is difficult to agree with him [Mahama] on the soiled image of the judiciary. The judiciary has a range from the magistrate court all the way to the Supreme Court. From what I have read, he has a problem with the Supreme Court and the cases that they took there, and history has shown us something that we should not do too frequently,” Justice Douse intimated.

He told Class FM, “The Supreme Court is a very important body to which all of us will refer from time to time, and if we drag it in the mud too much it will affect everybody as well.”