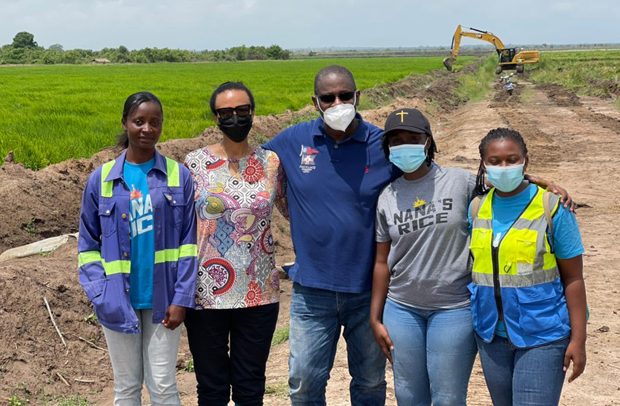 AfDB Veep, Nana and other officials in a pose

Mr Adegbie-Quaynor expressed surprise at the level of operations of the the Ghanaian company recently when he visited Agro Kings Farms in Akuse, accompanied by the AfDB country manager.

In a Linked-in post, after the visit, Mr Adegbie-Quaynor highlighted, “While a young company, they are very conscious of and are adapting climate resilience into their operations – use solar power, use of irrigation channels, recycling waste water and rainwater.”

The AfDB Vice President added that the YEIB and Agro Kings could work with over 2,000 rice farmers in the Akuse/Asutuare area to establish and co-own a specialised equipment rental company so that such significant CAPEX investments could be leveraged more affordably across many farms.

Nana leads a young team (90% below 35 years) and gender-diverse management team along with a Brazilian agronomist and rice field manager.

In 4 years, Agro Kings has already engaged more than 350 smallholder farmers, empowering them to increase earnings by 40% and transforming the lives of over 3000 families along the value chain. It is expanding its production to 10,000 acres with three main crops – rice, sweet potatoes and chili pepper.

Founded by Nana Owusu-Achau, a 32-year-old Ghanaian, Agro Kings focuses on farming, agro-processing, and agri-tech, with 60% of its management team being women.

According to Nana Owusu-Achau, the growing import of food and the continent’s rising population necessitated abandoning his budding finance and investment career on Wall Street in the US and taking up farming to feed the continent starting from Ghana.

Currently, Ghana imports 70% of its rice consumption, worth about $4 billion. Meanwhile, the average rice farmer earns 40% less than what they could earn.