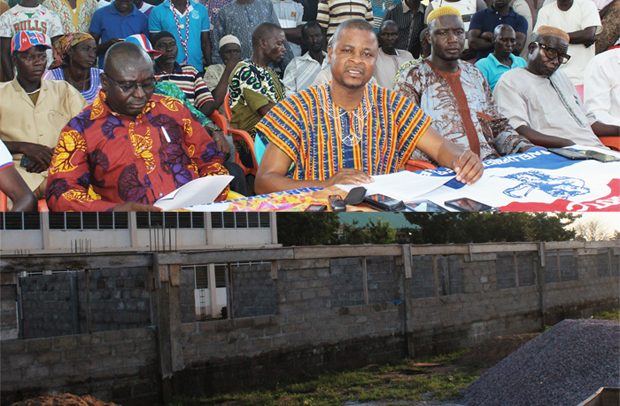 A Deputy Attorney General and Member of Parliament (MP) for Tempane, Joseph Dindiok Kpemka, has finally reacted to Joshua Akamba of the National Democratic Congress (NDC), saying “Akamba is not happy that government is working hard to liberate rural communities from the shackles of illiteracy”.

According to him, Akamba and his likes are embittered as regards the Free Senior High School programme and have resolved to use every means to make it look so bad for Ghanaians to reject it, adding that “what happened at the Tempane SHS was among the list of strategies he and others intend to use”.

Mr. Kpemka was speaking at a press conference at Tempane in the Upper East Region to respond to a social media video in which a national deputy organizer of the NDC, Joshua Akamba, was seen inciting some school girls at a female dormitory at the Tempane SHS to misconduct themselves.

The Deputy Attorney General was very emphatic that it cannot be true that the female students of the school stopped Mr. Akamba’s vehicle to tell him their problems as he has claimed in some media reports, adding that Mr. Akamba had planned the action and deliberately did it to stop Ghanaians from seeing anything good in the Free SHS.

If Mr. Akamba was travelling to Worinyanga as reported, then he would use the road in front of the dormitory. Other NDC aspirants have used this road and there were no issues. Mr. Akamba had said the children ran to the road and stopped his vehicle to tell him their problems.

On the other hand, Mr. Kpemka insists that the NDC deputy organizer and his team summoned the students from their dormitory when it was drizzling and deliberately choreographed what was seen in the video.

“It was pre-meditated and deliberate orchestration to cause disaffection to government. It was not and never the case that it was spontaneous,” he said.

“… Tempane SHS was established in 1998 on the premises of the old Tempane Middle Boarding School with limited infrastructure. I was privileged to be the first English teacher with several constraints. … It was not until the government of former President Kufuor came to power that the school witnessed massive infrastructural development,” he disclosed.

According to him, the New Patriotic Party (NPP) has shown so much commitment to the school by providing a 12-unit classroom storey block, a storey administration and storey boys’ dormitory blocks, including the new structure that is being used as dining hall.

“The government of Nana Addo Dankwa Akufo-Addo in 2017 upon the request by the MP promptly awarded a contract for the construction of an additional dormitory block and a six-unit classroom block. … The district assembly last year awarded a three-unit classroom block to augment the existing structures. The three projects are at various stages of completion,” he revealed.

He added that the only project the NDC initiated was abandoned until the NPP came to power to get work to resume. When completed, it will serve as girls’ dormitory to reduce the congestion in the existing girls’ dormitories.

Mr. Kpemka noted that government is aware of the constraints and has been working hard to address them, and should not be made to look as though government has abandoned the school.

“Instead of applauding the government of Nana Akufo-Addo for working so hard within 20 months to improve upon the infrastructure of the school and help students to live decent lives, Mr. Akamba and his likes are ironically engaged in propaganda and hypocritical tendencies difficult to understand.”

The Tempane MP believes that government has not discriminated against the people of the area in terms of project distribution as the NDC has tried to portray, citing the creation of additional districts for the area.